Stocks To Watch In November: In Review

Stocks To Watch In November: In Review

At the end of October, we published an article on 3 stocks that we believe investors should have on their watch list for the month of November, and today we will go over how they did, what has transpired since the alert, and what catalysts may come!

Most investors that are familiar with us here at Equity Insight, know that Kontrol Energy Corp (CSE: KNR) (OTCQB: KNRLF) has been our top technology pick for quite sometime and for many reasons. The month of November has been a month of achieving many milestones which included KNR receiving its CSA certification from the CSA Group on November 5th 2020, which allows the company to begin commercialization of its revolutionary Covid-19 air detection technology dubbed BioCloud in Canada. In addition to receiving CSA certification, KNR has also obtained UL Standards approval the following week on November 12th 2020. The CEO of KNR Mr. Paul Ghezzi was quoted, "With CSA and UL we now have standards approval that covers Canada, the United States and various other global regions. We continue to work towards CE standards certification which is primarily for the European market”. These two certifications are a great step forward, as now KNR is able to offer its BioCloud analyzer to clients in both Canada and the United States!

On November 18th, 2020, Kontrol Energy announced that the company has entered into two non-exclusive distribution agreements for BioCloud and covers the provinces of Saskatchewan and Ontario. The company has also stated that it has commenced discussions with various parties for the potential of industry exclusive distribution agreements, and these industry exclusive distribution agreements would require orders for a specific minimum quantity of units. In addition to the press release, KNR also stated that it has launched its new website www.kontrolbiocloud.com and that the company expects to formally change its name to Kontrol Technologies Inc. by the end of December. This change is to better reflect the companies growing technological offerings through its various subsidiaries.

Unfortunately shares of KNR have seen some downward pressure due to the vaccine news announced by Pfizer in early in November, however, shares of KNR have rebounded steadily as KNR closed the trading session at $3.57 on Friday November 26th, 2020. Although shares are down -14.7% since October 29th of the recent price of $4.19, congratulations to those who took advantage of the recent pullback as KNR nears large developments such as large purchases orders for its BioCloud analyser which may send the stock to break all time highs! 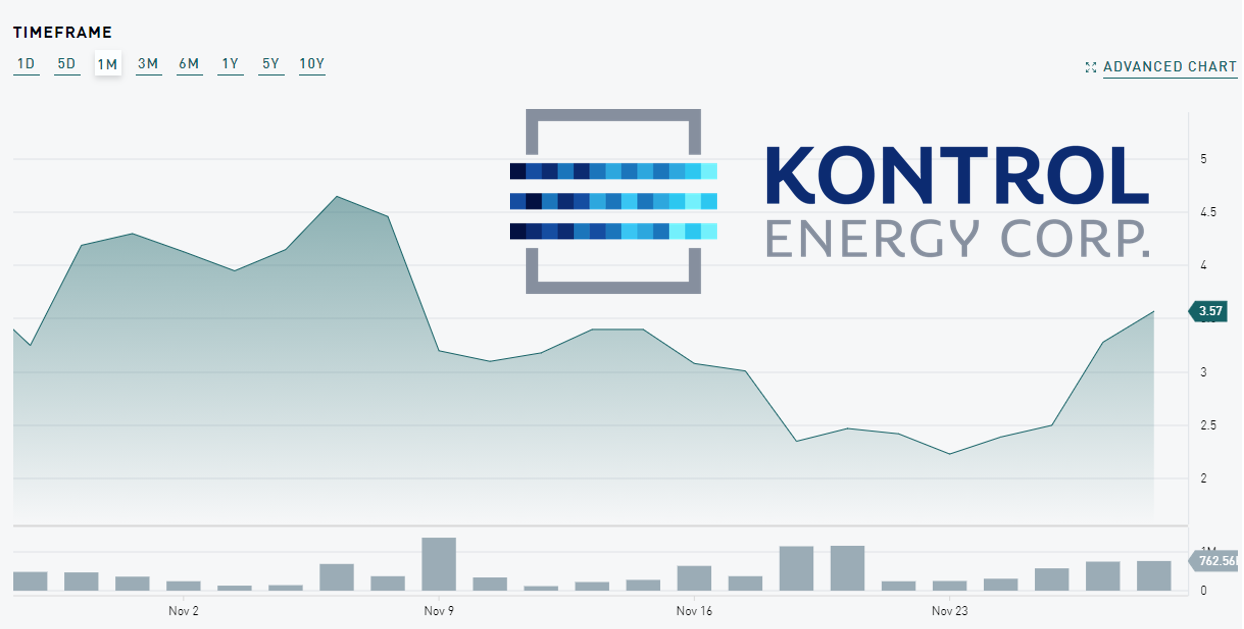 Kontrol Energy will be hosting a conference call on November 30th, 2020 at 4:30 PM EST to discuss the company’s third quarter financial results for the nine-month period ending on September 30th, 2020. Investors of KNR are urged to participate in the earnings conference call and can do so by dialing Toll Free: (877) 407-0782 or via its webcast, which can be accessed here.

With BioCloud receiving CSA certification and UL standards approval and with distribution agreements in place, it looks like KNR is positioned in a great way to generate massive purchase orders soon and be recognized as a Canadian technological giant!

Delta Resources Limited (TSX-V: DLTA) (OTC: GOLHF) is a junior exploration company that we put on alert to investors as DLTA was beginning to drill its Delta-2 property located in Chibougamau, Quebec, approximately 2 km south from one of Canada’s richest mines known as the Lemoine mine. The Lemoine Mine was an extremely rich deposit, which from 1975 to 1983, the Lemoine Mine produced a staggering 757,585 tonnes of ore with grades of 9.52% Zn, 4.18% Cu, 4.56 g/t Au and 82.26 g/t Ag. This is what makes Delta-2 very exciting!

On November 3rd 2020, DLTA announced that the drilling contractor Miikan Drilling Limited has mobilized its drilling rigs to the Delta-2 property and DLTA has begun a 5,000 metre drilling campaign, beginning at the its Snowfall gold occurrence. DLTA began with Phase I of drilling which comprises of a minimum of 12 drill holes totaling 2,000 meters. That part of the drill campaign is nearing completion at which point DLTA will move its drill, to drill test a number of high priority Lemoine type targets as referenced above. The initial campaign was to drill test 6 new gold-rich polymetallic targets located at the southern part of Delta-2, which would include the Snowfall Gold-Silver-Copper area. The targets that DLTA is targeting at the southern portion of its property is similar to the magmatic-hydrothermal gold deposits that was mined by past producer Joe Mann. From 1957 to 2007, the Joe Mann property resulted in 1.173 million ounces of gold with grades of 8.26 g/t Au, 607,000 ounces of silver at 5 g/t Ag and 28.7 million pounds of copper at 0.25% Cu.

After the completion of its Phase I drilling campaign (in the coming days!), DLTA will immediately begin Phase II of drilling. DLTA’s Phase II drilling program will consist of a minimum of 10 holes and an additional 3,000 meters that is geared towards testing the Volcanogenic Massive Sulphide (VMS) targets found in the eastern part of Delta-2. The Volcanogenic Massive Sulphide targets are in proximity and share geological similarities to the historic Lemoine Mine. 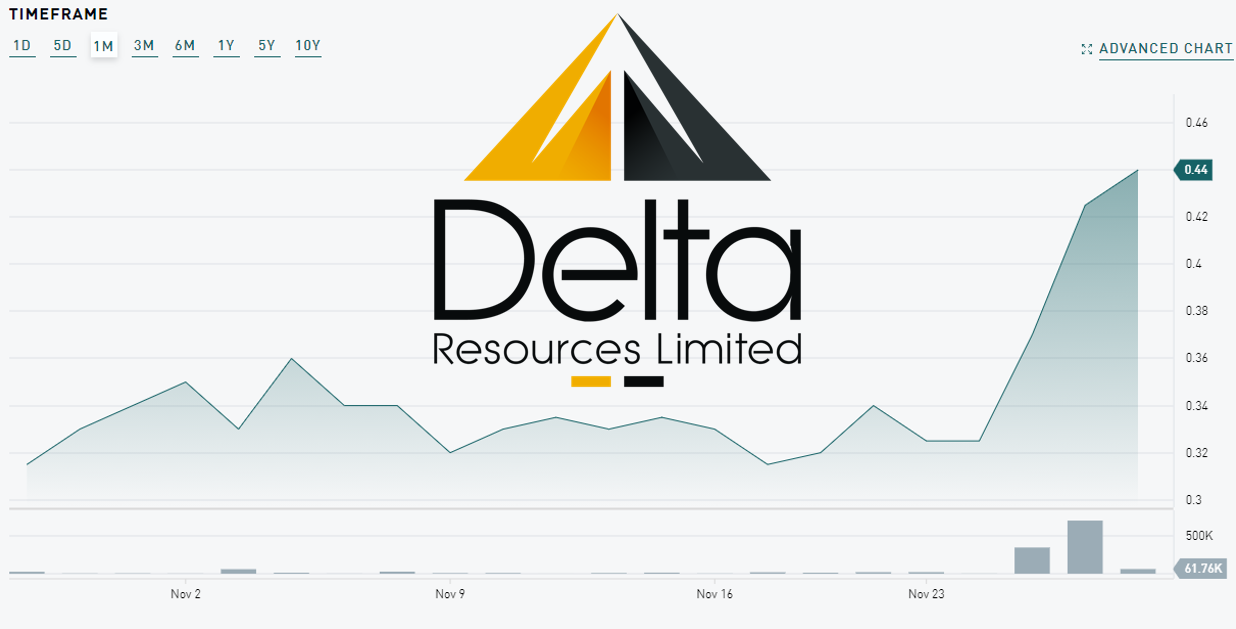 This campaign will last until December 18th at which point DLTA will break for the holidays. Drilling will resume in the early New Year. DLTA expects to begin announcing results from its drill campaign in January and flow will extend throughout the entire first quarter and beyond.

Since our recent publication “Stocks To Watch In November” shares of DLTA have rallied from $.33 cents to hitting a day high of $.45 cents, closing near highs of the day at $.44 cents per share. This resulted an ROI of 36% for investors, however with drilling currently underway, we believe that at a market cap of $15.5 million, DLTA still presents an attractive opportunity for investors and has a lot of room for more growth! Should DLTA succeed in hitting VMS structures similar to the Lemoine Mine, the stock could rally substantively from here.

The third stock we put on alert to investors for the month of November is TAAT Lifestyle & Wellness (CSE: TAAT) (OTCQB: TOBAF) an American company that has created an alternative of tobacco and nicotine free cigarettes derived from Hemp. On October 29th, 2020, we alerted investors on TAAT at $2.30 and within the month, shares of TAAT soared 82% in 15 days, hitting a high of $4.20.

We put TAAT on alert because we anticipated that shares of TAAT would rally as the company approached the launch of its Beyond Tobacco products in the State of Ohio on November 27th, 2020. However, on the company’s press release, TAAT stated that they are committed to having Beyond Tobacco available to customers in Q4 2020.

We believe this may have been strategic as to not coincide the launch with American Thanksgiving which was the day before. TAAT fourth quarter is October to December, and for this reason we believe the next launch date will be in the middle of December, right before Christmas and the company’s fourth quarter. Shares of TAAT may rally again as the launch of Beyond Tobacco nears in the next couple of weeks. 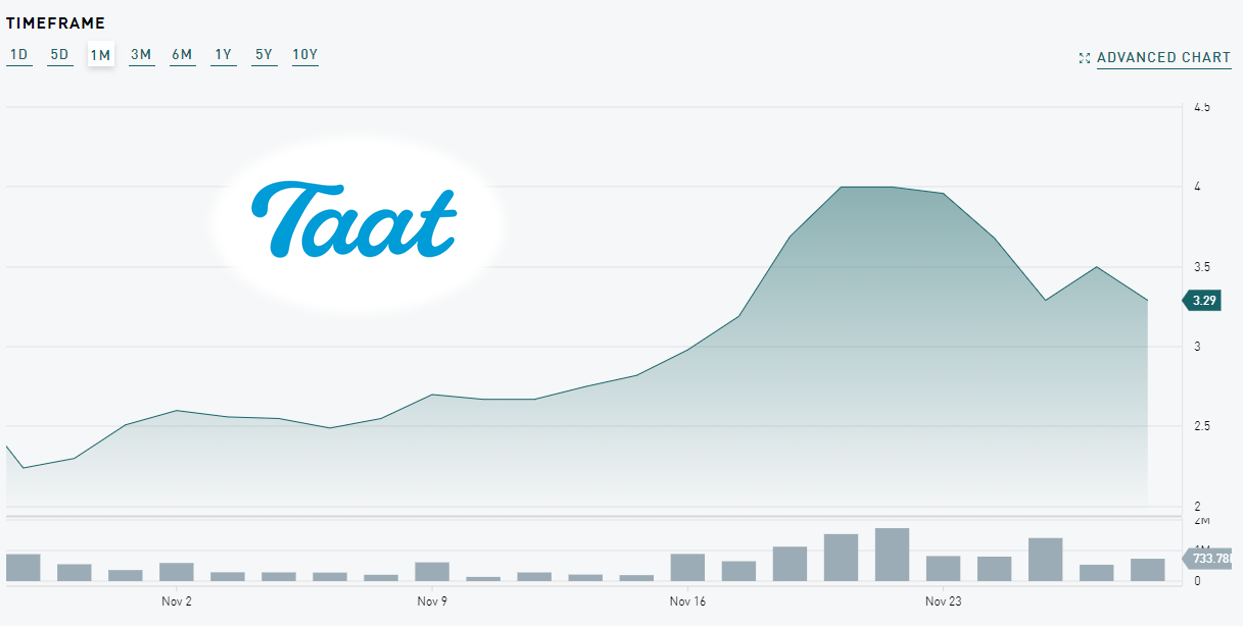 Forward Looking Statements: This article may contain "forward-looking information" (as defined in applicable Canadian securities legislation) that is based on expectations, estimates and projections as of the date of the content is published on this website. Wherever possible, words such as "anticipate", "believe", "expects", "intend" and similar expressions have been used to identify these forward- looking statements. Information in this article that has been furnished for your information only, is accurate at the time of posting, and may be superseded by more current information. Except as required by law, we do not undertake any obligation to update the information, whether as a result of new information, future events or otherwise. This article should not be considered as personal financial advice. Full Disclosure: The company Delta Resources is a client of The parent company of EquityInsight.ca. Directors of the parent company of Equity Insight may buy, hold or sell the securities before during or after this publication.