Genesis Metals (TSX-V: GIS) (OTCQB: GGISF) is a gold discovery company that aims to develop the Chevrier Gold deposit in Quebec and the October Gold property in Ontario. Both sites feature easy accessibility and nearby infrastructure, in addition to being located in the mining-friendly jurisdictions of Quebec and Ontario respectively.

Genesis Metals makes up a part of the Discovery Group, an alliance of public companies working to advance mineral exploration and mining projects that have a proven ability to generate value for shareholders through responsibility, sustainability and innovation. Genesis Metals is based in Vancouver, British Columbia, Canada.

The Chevrier Gold Project is located in Chibougamau, Quebec, Canada. Genesis Metals holds a 100% stake in a large property of over 275 square kilometers and has great potential for the discovery of high-grade deposits. Over the lifetime of the Chibougamau mining district, it has produced over 6.7 million ounces of gold production.

The Chevrier property covers an emerging mineralized belt called the Fancamp Deformation Zone, which is currently being explored by multiple companies. High-grade intervals of gold have been discovered at the Chevrier site. Since the second quarter of 2016, the work completed on the project includes an inventory of over 70,000 meters of drill core, massive resampling of the site, compilation of data for 130+ kilometers of new targets, and 3D modeling of the Main, South and East zones. 10,000 meters of drilling was completed in 2017.

The Chevrier property was explored and mined in the past. But with new geological advances and models, the management team believes that the property has not been fully discovered and holds great potential for upside.

Genesis also has 100% interest in the October Gold property in Ontario. This property is in the Southern Swayze greenstone belt in Benton Township, Ontario. Covering 203 square kilometers, Genesis’ efforts in the area identified two significant gold anomalies in the past, one covering an area of 1.5 km by 3 km, and the other 2 km by 2 km. There is a high degree of confidence that these anomalies will reveal strikes. The nearby Kirkland Lake Deposits and the Kerr Addison-Chesterville gold deposits have historically produced gold in excess of 49 million ounces. The area is easily accessible via the Trans Canada Highway and logging roads crisscross the property.

Genesis Metals boasts an experienced management team with a strong track record of success. The company’s Chairman and Director Adrian Fleming, P.Geo. is the former director of Northern Empire Resources and the former CEO of Underworld Resources. CEO, President and Director David Terry, PhD., P. Geo. is a professional geologist with over 30 years of international experience from his key roles in discovery, acquisition, exploration and development of many precious and base metal deposits in North and South America. He also served as Director of Great Bear Resources, Ltd., Golden Arrow Resources Corporation, and Aftermath Silver Ltd.

Delta Resources (TSX-V: DLTA) (OTC: GOLHF) is a gold exploration company with a significant land package of over 160 square kilometers in the heart of Chibougamau, Quebec, a very rich area for mining. We have recently put out an alert to investors at $.36 cents in our article entitled “Gold Exploration Company Delta Resources On Alert”.

In early July, DLTA began a program of mechanical trenching which is part of its phase II exploration program at its Delta-2 property located in Chibougamau. Targets at the Delta-2 property have magmatic-hydrothermal gold deposits which are similar to the Joe Mann property which produced 1.173 million ounces of gold at a grade of 8.26 g/t Au, 607,000 ounces of silver at 5 g/t Ag and 28.7 million pounds of copper at 0.25% Cu, from 1957 to 2007. Andre Tessier, CEO of DLTA was recently quoted “We are working as quickly as possible to be drill ready for late summer. Visual examination of the rocks was enough to prompt this accelerated pace, particularly at the Snow gold occurrence.  So far, we are very excited with our results and continue to be optimistic of the potential results. We have a large land package which could yield several new discoveries”.

Furthermore, the team at DLTA is also targeting Volcanogenic Massive Sulphide (VMS) on the Delta-2 property similar to the Lemoine Mine located only 1.5km to the north. The Lemoine Mine is one of the richest mines in Canadian history with historical grades that produced over 757,000 tonnes of ore which includes 4.18 of Copper, 9.52% of Zinc, 4.56 g/t of Gold and 82.26 g/t of Silver. The Delta-2 property was acquired on October 16th, 2019 and spans over ~160 square kilometers with 298 claims and owned 100% by DLTA. 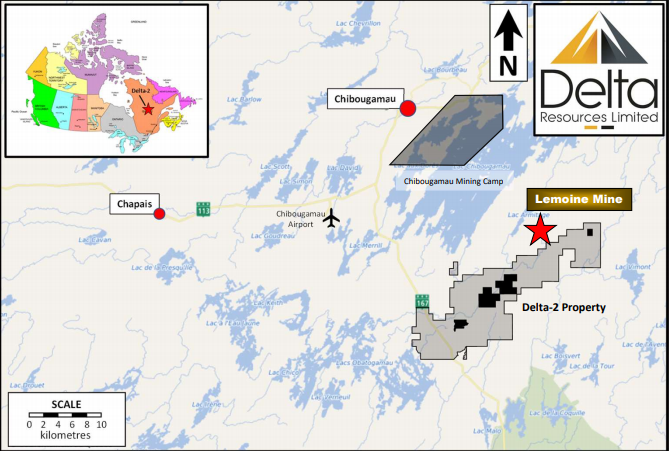 On July 23rd 2020, DLTA received approval from the TSX-V for the sale of its Bellechasse-Timmins property to Yorkton Ventures for $1.7 Million, which DLTA has already received its first payment of $100,000. The sale of the Bellechasse-Timmins property is a great way to secure additional funds for DLTA in a non-dilutive fashion to further its exploration program. In addition to the cash portion of the sale, the vendor Yorkton Ventures must also pay DLTA a Net Smelter Return (NSR) of 1%, however the vendor is able to repurchase .05% of the NSR for $1,000,000 at any moment.

Delta Resources has begun to receive results of grab samples from the Delta-2 property, and on July 28, 2020 DLTA announced that the company received samples with grades 8.66% of Gold, 190 g/t of Silver and 3.94% of Copper. These are significant early findings for DLTA, and the results speaks to the potential of the property and the possible richness of Delta-2 due to its proximity to historic properties such as the Lemoine Mine as previously noted. CEO of DLTA Andre Tessier stated, “We have a tremendous opportunity to make a significant discovery in a mature camp where multiple deposits already exist.  Our team of geologists is extremely excited and motivated by this new discovery.  We’re looking forward to receiving the results of our channel sampling shortly”. Delta Resources has also stated that channel sampling has been completed and that more assays from the Delta-2 property are currently pending and we expect DLTA to announce many more impressive results in the near future and drilling is set to commence at the Delta-2 property in the fall!

Troilus Gold (TSX: TLG) (OTCQB: CHXMF) is an advanced stage exploration and early development company based in Toronto, Ontario, Canada. The company is presently focused on the restart of the formerly operational gold and copper Troilus mine. This property is located in northeastern Val-d’Or in Quebec, Canada, inside the Frotêt-Evans Greenstone Belt.

The Troilus project was an open-pit mine from 1996 to 2010, operated by Inmet Mining Corporation. Over that span, the property produced more than 2,000,000 ounces of gold and around 70,000 tons of copper. The previous production on the site means that significant existing infrastructure remains.

Following the closure of the mine in 2010, the mill and camp were sold and dismantled. However, a 50 MWA substation and power lines, well-maintained roads as well as a water treatment facility and a permitted tailings facility remain. The mining lease is still active from when production ended. The existence of this infrastructure already in place has the potential to greatly speed up the timeline of the project.

Being located in Quebec adds to the opportunity of the site, as Quebec is a mining-friendly jurisdiction. The site’s proximity to Chibougamau and Mistissini allows access to an experienced labor pool. The project has the solid support of municipal leaders as well as the community.

Troilus is a well-capitalized company with no debt. It has a strong shareholder base of institutional investors and major global resource funds. Troilus Insiders hold about 10% of the stock. There is a significant portion of the stock owned by Quebec firms such as Caisse de Dépot and Chibougamau Drilling, as well as several Quebec-based institutional investors. Over a quarter of the stock is owned by institutional and corporate investors. The company has a board of directors and management team with strong experience in the mining and geological fields and who have a successful track record of delivering value to shareholders.

Troilus completed a $25 million bought deal which closed on June 23, 2020, and a $12.8 million private placement which closed February 28, 2020. The company already has the cash reserves it needs to fund operations and critical deliverables through 2021.

Facing the challenges of COVID-19, the company started a gradual reopening of the Troilus site in May with an emphasis on protecting health and safety. Key development activities that could be completed with minimal staff to limit exposure was the primary focus of the reopening. Drill results from Southwest Zone, the Preliminary Economic Assessment, field exploration of new claims and the identification of new drill targets and infill drilling are all on track for the second half of 2020.

Forward Looking Statements: This article may contain "forward-looking information" (as defined in applicable Canadian securities legislation) that is based on expectations, estimates and projections as of the date of the content is published on this website. Wherever possible, words such as "anticipate", "believe", "expects", "intend" and similar expressions have been used to identify these forward- looking statements. Information in this article has been furnished for your information only, is accurate at the time of posting, and may be superseded by more current information. Except as required by law, we do not undertake any obligation to update the information, whether as a result of new information, future events or otherwise. This article should not be considered as personal financial advice. Full Disclosure: Delta Resources Ltd. is a client of EquityInsight.ca. Directors of the parent company of Equity Insight may buy, hold or sell the securities before during or after this publication