Zoomd Technologies: From Start up to Blue-Chip Clients

Zoomd Technologies: From Start up to Blue-Chip Clients

Zoomd Technologies Ltd. (TSX-V: ZOMD) (OTC: ZMDTF) is a digital advertising marketing technology company based out of Tel-Aviv Israel and was formed through the acquisition and amalgamation of Moblin which ZOMD acquire in 2017 for USD$10 million and SphereUp, a site search engine for USD $7 million. Zoomd Technologies began trading on the TSX Venture Exchange on September 3rd 2019. Zoomd Technologies helps advertisers to acquire new users and optimize their media spend which helps reduced excessive media spend while improving the conversion rate into buyers and operates with over 600 advertising channels around the world. For publishers, ZOMD enables publishers to increase their revenues through its new search-based engine that improves ad placements which offers a higher conversion rate resulting in increased revenues for the publisher from new channels.

ZOMD was founded by Israeli business mogul Amit Bohensky, who, back in 2011 sold FocalInfo, a company founded by Mr. Bohensky for $50 million to NASDAQ listed company Verient Systems (NASDAQ: VRNT).

The growth plan for ZOMD in 2020 is a multi faceted approach which includes acquisitions of small-medium businesses (SMB’s), the addition of media and data global sources being integrated and ZOMD is also targeting its expansion into new geographical areas in key markets. ZOMD is already boasting many customers in over 70 countries around the world with local subsidiaries in Canada, Mexico, Brazil, Blugaria, Singapore and South Korea, and the expansion into other markets will be a strategic move for ZOMD as it embarks on its global grow plan for 2020.

Zoomd Technologies has global blue-chip customers from the e-commerce industry to utilities industry and includes clients such as, Ali Express, PokerStars, 888.com, Etoro, TikTok, Walmart and Mcdonald’s. Zoomd Technologies extensive list of blue-chip customers is a testament to the efficacy that ZOMD technology offers its clients and potential clients around that world! 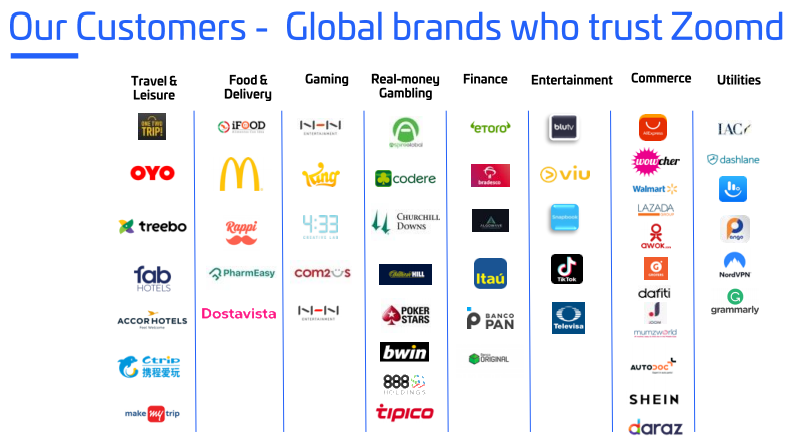 On February 18th, 2020, ZOMD expanded its operations in Latin America as the company signed an agreement with Banco Original and Magazine Luiza of Brazil. ZOMD is also in the process of onboarding additional clients in Latin America and these new agreements are expected to generate approximately USD $5 million dollars in annual revenues. Chief Executive Officer and Co-founder of Zoomd Technologies, Mr. Ofer Eitan was quoted "It is our next expansion target following a successful entry into Southeast Asian markets last year and part of our overall global growth strategy. We expect to be signing additional Latin American clients over the next 12 months, increasing our revenue from the region”.

As ZOMD continues to expand its geographical footprint around the globe, this will translate into additional agreements with other large entities and will add significant revenues down the line which shareholders should keep an eye on.

Last month, on April 28th, ZOMD announced impressive annual revenues of USD $27 million or CAD $36 million with gross profits totaling $7.9 million for the period ending December 31st 2019. The annual revenues of CAD 36 million speaks to the discount at which ZOMD trades as its current market cap is valued at approximately $31.7 million. Zoomd Technologies market is lower than its annualized revenues and investors should take advantage of the value proposition that is ZOMD.

In addition to its news on April 28th 2020, ZOMD announced that the company completed the integration of Google Universal App Campaigns with its application programming interface (API).  Furthermore, ZOMD has also signed on new global players such as Disney (NYSE: DIS), Com2Us games, RollicGames and others publishers including South Africa’s Inquirer magazine, Manilla Times in Philippines and ABS-CBN in Germany.

Shares of ZOMD have tumbled to an all-time low recently on low volume and due to the low liquidity, this makes it difficult to acquire a significant position in ZOMD, however if an investor has the patience to accumulate, they may be well rewarded in the long term at current levels. With impressive revenues north of $35 million, a large ownership ~88% between insiders and angel investors, tight float of ~12% or 11.6 million shares and a long list of blue-chip clients, Zoomd technologies is the perfect technology stock investors must put on their radar at .34 cents!

Forward Looking Statements: This article may contain "forward-looking information" (as defined in applicable Canadian securities legislation) that is based on expectations, estimates and projections as of the date of the content is published on this website. Wherever possible, words such as "anticipate", "believe", "expects", "intend" and similar expressions have been used to identify these forward- looking statements. Information in this article has been furnished for your information only, is accurate at the time of posting, and may be superseded by more current information. Except as required by law, we do not undertake any obligation to update the information, whether as a result of new information, future events or otherwise. This article should not be considered as personal financial advice. Full Disclosure: None of the companies mentioned in the article are not clients of the parent company of EquityInsight.ca Directors of the parent company of Equity Insight may buy, hold or sell the securities before during or after this publication.