Recently we published an article on 2 Coronavirus stocks that investors should keep an eye on as the covid-19 pandemic continues to grow globally. The first company we highlighted is Sona Nanotech Inc. (CSE: SONA) (OTC: SNANF) of Halifax, Nova Scotia. We first wrote about SONA on March 16th, 2020 when shares were trading at an average of $0.51 cents per share and since our previous article, shares of SONA have increased 239% as shares closed at a price of $1.73 on April 02nd 2020. The company has been quite active, and we will highlight some of the developments since our original article.

On March 30th SONA announced that the company has entered into a manufacturing service agreement with a contract manufacturing organization (CMO) located in Europe. Under the agreement, the company will manufacture SONA’s rapid-response test for detecting Covid-19. In addition to the company’s announcement, SONA has also entered into a letter of intent (LOI) for a sales agreement with an international distributor to purchase 2 million test kits. Although the company’s test kit is still in development, the company expects to complete a fully functional prototype very soon and will commence validation thereafter. The following day, on March 31st 2020, SONA announced that the company has been awarded a significant $4.1 million dollar grant from Canada’s Advanced Manufacturing Supercluster known as NGen. NGen helps to connect companies with new products in innovative industries to assist in increasing manufacturing in the Canadian landscape. The CEO of NGen Mr. Jay Myers was quoted, “NGen is excited to support Sona Nanotech's efforts to get a point of-care test for COVID-19 in the hands of Canadian medical authorities as soon as possible. Sona's proprietary and unique gold nanorod technology enables a rapid-response antigen test that has the potential to significantly reduce the time-to-results for COVID-19 diagnosis and ultimately save lives."

In addition to solid developments emerging from SONA, Maxim Group have released today its speculative 12-month price target of $3.00 per share. This would represent a gain of 488% from the price of $.51 cents when we alerted SONA to investors on March 16th, 2020. 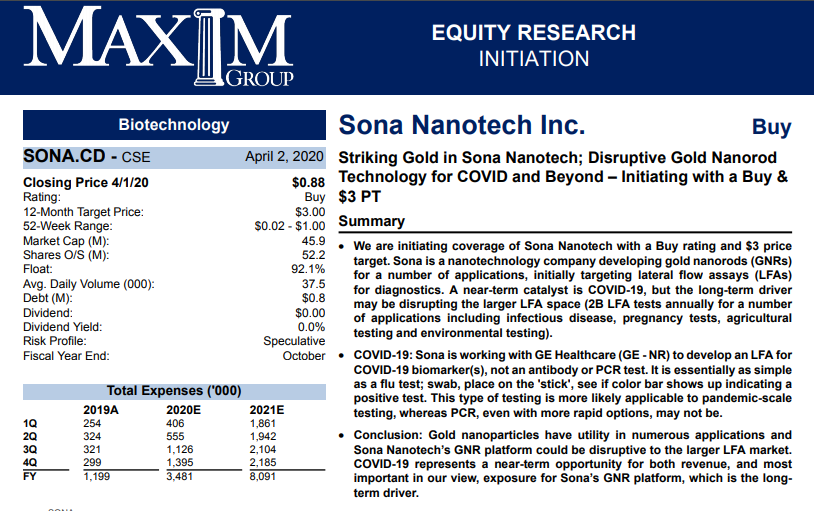 Algernon Pharmaceuticals (CSE: AGN) (OTCQB: AGNPF) is another small cap company that we have put on watch as the world grips with the spread of coronavirus. AGN has recently announced on March 23rd 2020 that the company has secured a manufacturing agreement with Cascade Chemistry based out of the United States for the production of the synthesis of NP-120 (Ifenprodil). The company has advanced its production of its NP-120 treatment as AGN proceeds for clinical trials with toxicity testing set to be conducted. In addition to its clinical trials, AGN announced on March 30th 2020 that the company has submitted for an ethics approval on its planned Phase 2 study of NP-120 in Australia. Algernon’s CEO Mr. Moreau stated “This is major milestone for the Company as it takes its first step in formalizing its model of re-purposing known safe drugs, investigating them in animal models for new diseases and moving them quickly and efficiently into Phase 2 clinical trials,”. The company anticipates that the approval process may take anywhere from 4 – 8 weeks, and once AGN receives the approval in Australia, the Phase 2 study may begin. If AGN is successful in receiving its ethics approval, these developments could serve as a positive catalyst which could send the stock to new highs.

Furthermore, on April 02nd 2020, the company provide an important update regarding its planned human trials of NP-120 (Ifenprodil). AGN stated that it has completed a protocol for a planned physician Phase 2 clinical study of NP-120 in South Korea. In conjunction with Novotech, a contract research organization (CRO) that aids in providing solutions for clinical research around the world, and has extensive experience in key markets such as Asia, South Africa, New Zealand and most importantly, Australia where clinical trials are set to begin. The CEO of AGN Mr. Moreau stated “This is major milestone for the Company as it takes its first step in formalizing its model of re-purposing known safe drugs, investigating them in animal models for new diseases and moving them quickly and efficiently into Phase 2 clinical trials,”. Algernon Pharmaceuticals has been very active in its corporate communications to its investors with significant developments and we believe AGN will continue to update the market with more positive developments as the company inches closer to clinical trials of NP-120 (Ifenprodil) for Covid-19.

Forward Looking Statements: This article may contain "forward-looking information" (as defined in applicable Canadian securities legislation) that is based on expectations, estimates and projections as of the date of the content is published on this website. Wherever possible, words such as "anticipate", "believe", "expects", "intend" and similar expressions have been used to identify these forward- looking statements. Information in this article has been furnished for your information only, is accurate at the time of posting, and may be superseded by more current information. Except as required by law, we do not undertake any obligation to update the information, whether as a result of new information, future events or otherwise. This article should not be considered as personal financial advice. Full Disclosure: The parent company of Equity Insight has received compensation from a third-party, Frontier Flex for distribution of Algernon Pharmaceuticals. Directors of the parent company of Equity Insight may buy, hold or sell the securities before during or after this publication.