Is this Craft Brewer Ready for a Big Year in 2020?

Is this Craft Brewer Ready for a Big Year in 2020?


Waterloo Brewing Ltd. (TSX: WBR) formerly known as Brick Brewing Co., is Ontario’s largest Canadian owned brewery. Waterloo Brewing was founded in 1984 was the first craft brewery to commence operations in Ontario and has since been credited with forging the craft brewing industry into what it has become today. We will be going over many of the recent developments of Waterloo Brewing, and why this brewing company should be on the radar for investors.

On August 14th 2019, Waterloo Brewing received a research license for cannabis-infused beverages and the company expects to be ready for commercial production in summer of 2020. The CEO of WBR, Mr. George Croft stated “The cannabis market has garnered a great deal of investor interest and after an in-depth review of our strategic options, the Company is positioning itself to be a major producer of CIB's and to take full advantage of this new and developing beverage category”. Interestingly the company’s Chief Operation Officer Mr. Tabata also stated: "We have the equipment, the scale, the technical know-how and the speed to be able to pull this off in this extremely tight timeframe." With the recent legalization and availability of cannabis infused products and beverages set to expand in the coming months, investors should keep the launch of this possible cannabis beverage as a catalyst which could set shares of WBR higher. Its currently not known where WBR will source their cannabis for infused beverages, however due to the craft nature of Waterloo Brewing, we believe it would make sense the company sources its cannabis from craft growers as it coincides with the company’s craft vision.

On November 21st 2019, WBR was the target of a social engineering cyberattack by a third party which resulted in the theft of CAD $2.1 million in company funds. Waterloo Brewing is working with multiple authorities including Financial Transactions and Reports Analysis Centre of Canada (FINTRAC) and the United States' Finance Crimes and Enforcement Network (FinCEN) to assist in recouping the stolen funds however the possibility remains that the company may not be able to retrieve a portion or any of the funds. To date, the company has hired a third-party IT services company to conduct the investigation and is implementing security measures against further potential cyberattacks.

In late December, WBR announced that it entered into a three year agreement with brewing powerhouse Carlsberg Canada. Under this agreement, WBR will be the exclusive Canadian producer of its popular Somersby Cider Brand. President of Carlsberg Canada Mr. Sebastiaan Besems was quoted: “Somersby's partnership with Waterloo Brewing is integral to building the brand in Canada, delivering innovation and improving our service to customers." Waterloo Brewing expects to have Somersby Cider products on store shelves by Summer 2020 and the strategic partnership represents over CAD $20 million in incremental revenue. This additional co-packing agreement will have a positive effect on the company’s balance sheet and as the company generates more revenues, WBR should be in a position to continue to increase its dividend.

On December 4th 2019 Waterloo Brewing announced , $16.3 Million in net revenues for its third quarter, up from $14.2 million for the year prior. Gross margins also saw an improvement to 30.6%, up 2.8% from 27.8% the prior year. The company’s EBITDA also increased 19.2% to $8.6 million when compared to $7.2 million during the prior year. Waterloo Brewing also announced that due to its strong financial position the company has increased the quarterly dividend to $0.02625 per share from $.025 and represents a 5% increase of the dividend. As the company increases its co-packing agreements with other global brands and the possible launch of a cannabis infused beverage, there might be many developments over the coming months which should lead to more additional revenues for WBR and which would result in a continued increase in the dividend for its shareholders.

Although Waterloo Brewing common shares don’t have a whole lot of liquidity, we believe it is a name that could be worth accumulating on downward pressure. WBR seems to be a great mix of a growth name in a mature industry which also has blue sky potential in a brand-new market. With solid financials and a dividend, shares of WBR should appreciate in value over time as management continues to execute. It's worth noting that shares have risen over 400% over the last ten years and the dividend seems to be growing incrementally with no sign of abating. Sometimes patience does pay off and WBR looks like the perfect candidate for shadow lurking story that has all the right elements to be a long-term winner. 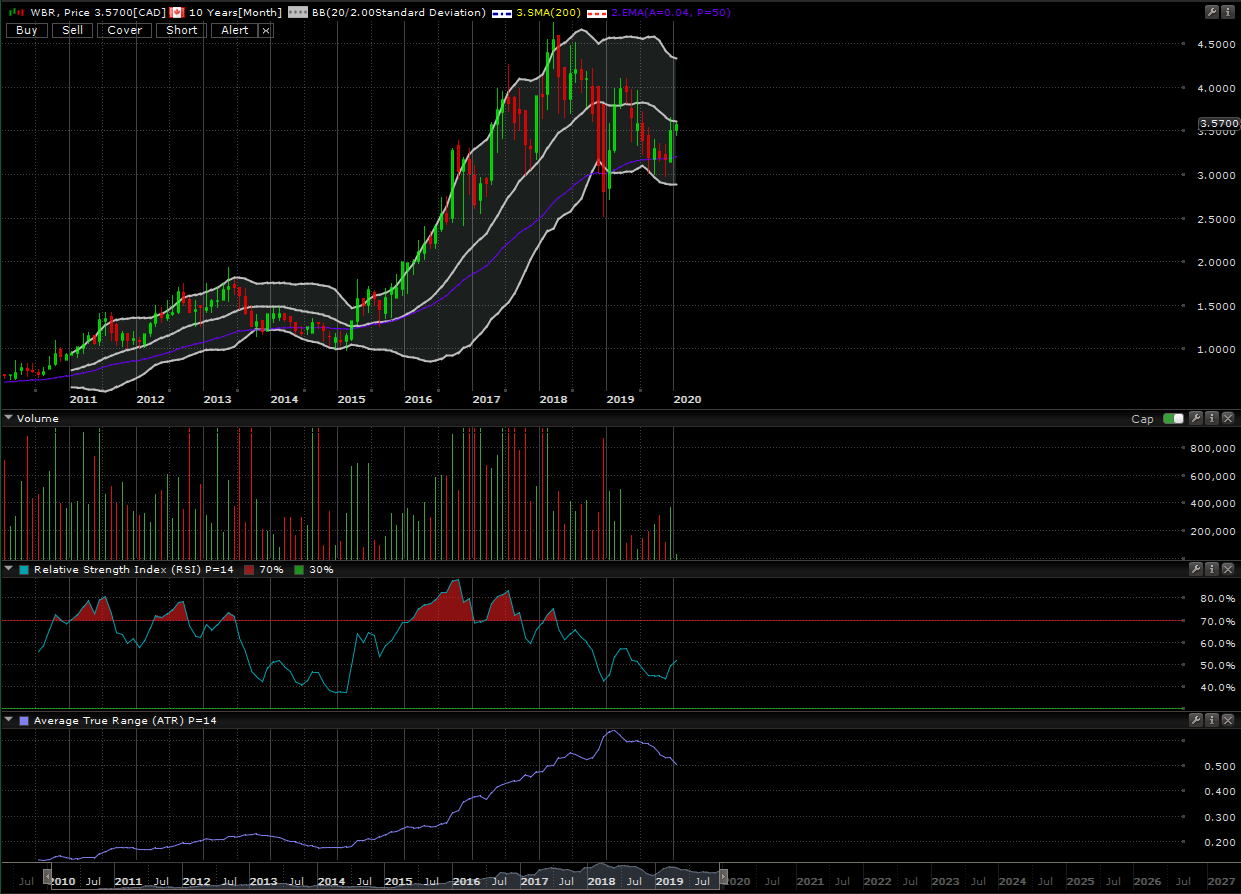 Forward Looking Statements: This article may contain "forward-looking information" (as defined in applicable Canadian securities legislation) that is based on expectations, estimates and projections as of the date of the content is published on this website. Wherever possible, words such as "anticipate", "believe", "expects", "intend" and similar expressions have been used to identify these forward- looking statements. Information in this article has been furnished for your information only, is accurate at the time of posting, and may be superseded by more current information. Except as required by law, we do not undertake any obligation to update the information, whether as a result of new information, future events or otherwise. This article should not be considered as personal financial advice. Full Disclosure: The parent company of Equity Insight is not a paid client of Meta Growth nor Fire & Flower Holdings. Directors of the parent company of Equity Insight may buy, hold or sell the securities before during or after this publication.