2 Cannabis Retailers Ready to Rise on Expansion in Ontario

2 Cannabis Retailers Ready to Rise on Expansion in Ontario

Significant changes to the licensing system are set to take effect this month as the government of Ontario has removed the previous lottery system which crippled access of cannabis to millions of Ontario residents. Starting on January 6th 2020, The Alcohol and Gaming Commission of Ontario (AGCO) will begin accepting retail operator licenses (ROL) and store authorization applications will commence on March 2nd 2020. AGCO is the regulatory body that oversees the cannabis retail system. It is stated that authorizations will be issued at the beginning of April and it is expected that the province of Ontario will approve approximately 20 licenses a month. The application approval rate is on par with what is currently happening in the province of Alberta.

Bank of Montreal Analyst Tamy Chen estimates that there may be a total of 325 cannabis dispensaries across Ontario by the end of 2020. With this being said, we believe that retail cannabis companies may present a big opportunity for investors looking to get back in the cannabis sector as the expansion of retail outlets will increase product distribution therefore an increase of revenues of retailers in this space.

First up on our list is Fire and Flower Holdings Corp. (TSX-V: FAF) a growing cannabis retailer with significant financial support from Alimentation Couche Tard (TSX: ATD.B). Fire and Flower currently has 41 stores according to our calculations from the Press Release dated December 2nd 2019, and another anticipated 3 additional stores were anticipated to be open during the week of December 16th 2019. Fire & Flower is set to expand 4 additional stores on January 10th and 5 stores on January 17th 2020 as per the company’s website.

On December 20th 2019, Fire and Flower became one of the first dispensaries to sell  new cannabis 2.0 products in its retail stores in the province of Saskatchewan. Fire and Flower was able to do this through its wholly owned distribution company called Open Fields Distribution. Open Field negotiates and purchases products directly with licensed producers in Canada. FAF expects to carry a variety of cannabis 2.0 products from several LP’s including; Aphria, Aurora, Dosist, Cronos, The Green Organic Dutchman, High Park (Tilray), Organigram, Redecan, and Sundial. Bernie Yeung, Vice President, Sales & Channel Strategy of Aphria Inc. (TSX: APHA) stated “Our team has worked diligently over the last year and we are thrilled to be launching our Solei, RIFF and Good Supply vaporizers in 510 and all-in-ones at Fire & Flower stores across the province of Saskatchewan,”.

Fire & Flower anticipates having a total of 55 stores open by Q1 2020 and a total of 85 are planned for full fiscal year of 2020. Investors should be on the look out for additional stores set to open in the coming weeks!

Meta Growth currently has 36 licensed locations in operation across Alberta, Saskatchewan and Manitoba. Meta has 5 licences under its Meta Cannabis Co. banner in Manitoba with the other four licensed retail cannabis stores through partnerships with Manitoba First Nations. The company is also able to open an additional 5 locations in Manitoba. So far there is only 1 location in Saskatchewan while its New Leaf brand has 25 licenses with 23 operational stores across Alberta as stated in the MD&A dated December 23rd 2019 and 1 joint venture with Sicamous Trading Company.

The Company also has applied for 7 licenses in B.C although Meta intends for 8 licenses, and Alberta has another 7 licenses which were submitted and is pending approval. Meta also anticipates receiving a total of 30 additional licenses in the province of Ontario. The total count in the MD&A states 85 locations however, in the company’s investor deck, it is stated that they are targeting for 90 stores. It’s not very clear as to the discrepancies in the information provided. These licenses once approved, will serve as potential catalysts investors may want to look out for in the coming months as Canada’s cannabis retail market expands in a very important market. 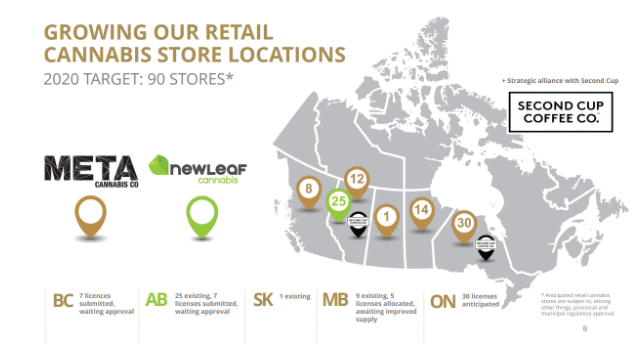 We first highlighted Meta Growth Corp. in a previous article dated November 27th 2019, when META had a share price of $0.19 cents and since then, the company has rallied 115% to $0.41 cents per share but has since pulled back for healthy consolidation to $0.30 cents. Shares of META should continue to rise over the coming months as they continue to open more retail outlets in 2020.

Forward Looking Statements: This article may contain "forward-looking information" (as defined in applicable Canadian securities legislation) that is based on expectations, estimates and projections as of the date of the content is published on this website. Wherever possible, words such as "anticipate", "believe", "expects", "intend" and similar expressions have been used to identify these forward- looking statements. Information in this article has been furnished for your information only, is accurate at the time of posting, and may be superseded by more current information. Except as required by law, we do not undertake any obligation to update the information, whether as a result of new information, future events or otherwise. This article should not be considered as personal financial advice. Full Disclosure: The parent company of Equity Insight is not a paid client of Meta Growth nor Fire & Flower Holdings. Directors of the parent company of Equity Insight may buy, hold or sell the securities before during or after this publication..