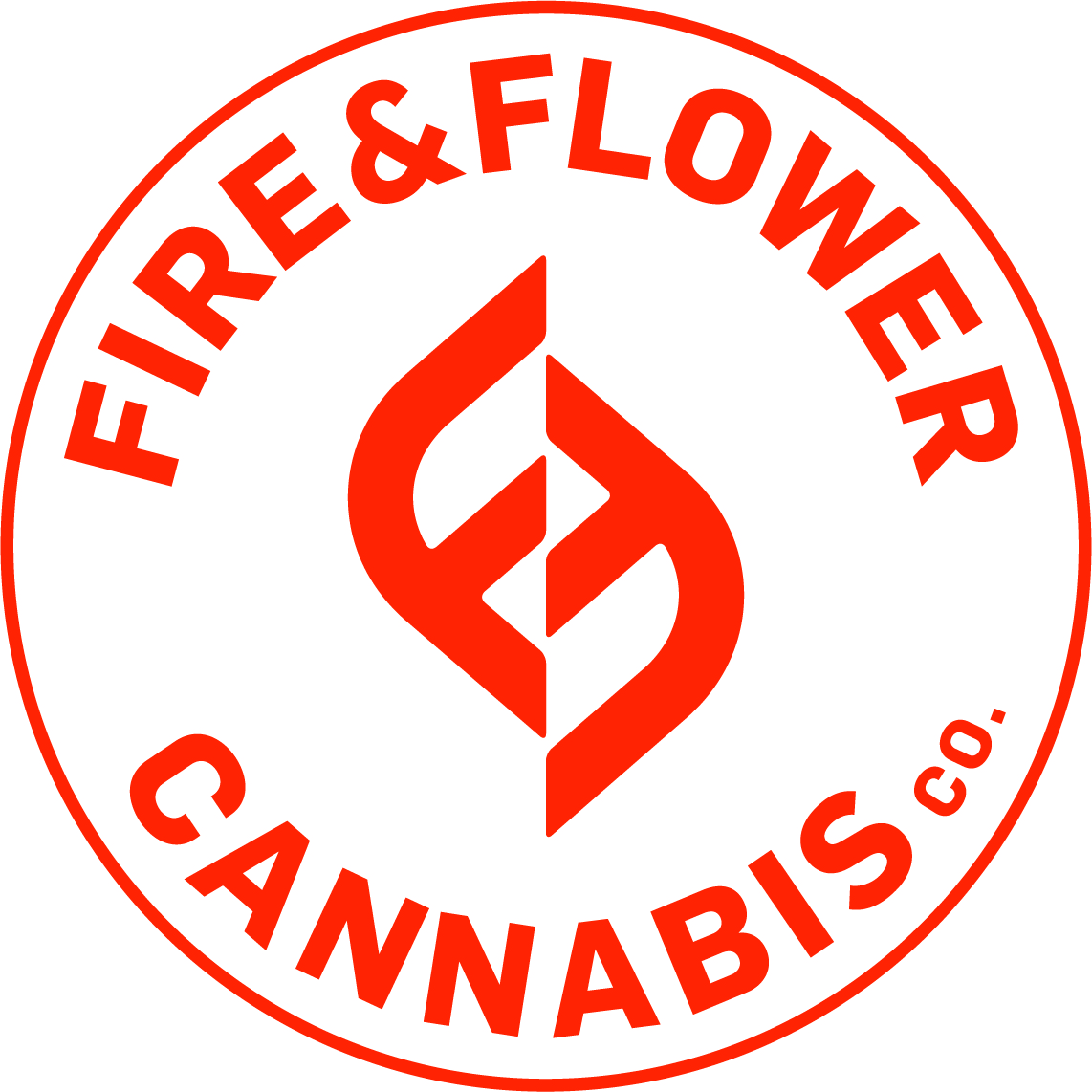 Fire and Flower Holdings Corp. (TSX: FAF) is a notable growing cannabis retail outlet in Canada. To date, the Company has 36 dispensaries operating across Alberta, Saskatchewan, Manitoba, Ontario and the Yukon Territory. Fire & Flower has also received interesting support from one of Canada’s leading convenience store giants: Alimentation Couche-Tard (TSX: ATD.A). On August 7th 2019, Fire & Flower announced that it has secured the closing of a strategic investment from the Couche-Tard. The investment from was in the form of a convertible debenture for $26 million which, if fully converted would represent 9.9% ownership (on a fully diluted basis) or 24 Million shares. The strike of the conversion feature is $1.07, or 17.5% above the current share price of $0.91 cents.

Looking at the Company’s previous financial statement, as of August 3, 2019, Fire & Flower had a total of $138.9 million in assets which includes an impressive $30 million in cash & cash equivalents. However also notable is the $42.7 Million debentures (Note 10) which makes up almost half of the total liabilities of $99M. There is also a $3 million convertible note that matures on November 30th.

On October 1st, Fire & Flower reported that during the thirteen weeks ended August 3, 2019, they generated revenue of $11.1 million including cannabis and cannabis-related accessory sales. These figures could see a dramatic increase in in 2020 as the CBC recently reported that the Ontario government is looking to increase the number of cannabis stores in Ontario to 1,000 and Fire & Flower could benefit greatly from the upcoming changes and expansion of retail stores in the province.

In September, Fire & Flowers subsidiary Hifyre™ launched its Spark Perks™ program across their retail locations. The program gives its members fastlane checkout along with special exclusive events and deals. To date the program has enrolled more than 45,000 members to its platform and the company states that its member spends approximately 32% more per transaction then non-members.

Fire & Flower currently has 36 retail stores with another 9 dispensaries planned to be open by the end of its fiscal year, bringing their total to 45. Furthermore, the company anticipates having 55 cannabis dispensaries open by Q1 2020, an additional 10 stores planned for Q2 2020, with a total of 85 stores planned for 2020. The expansion from 55 to a planned 85 locations represents an increase of 157% nationwide in 2020.

Meta Growth (TSX-V: META) formerly known as National Access Cannabis is another prominent cannabis retailer in Canada with 35 branded outlets across the nation. The company’s brand Meta Cannabis Co. operate 10 stores with 90% of its stores located in Manitoba and 1 location in Saskatchewan while all 25 NewLeaf Cannabis branded outlets are located in Alberta. 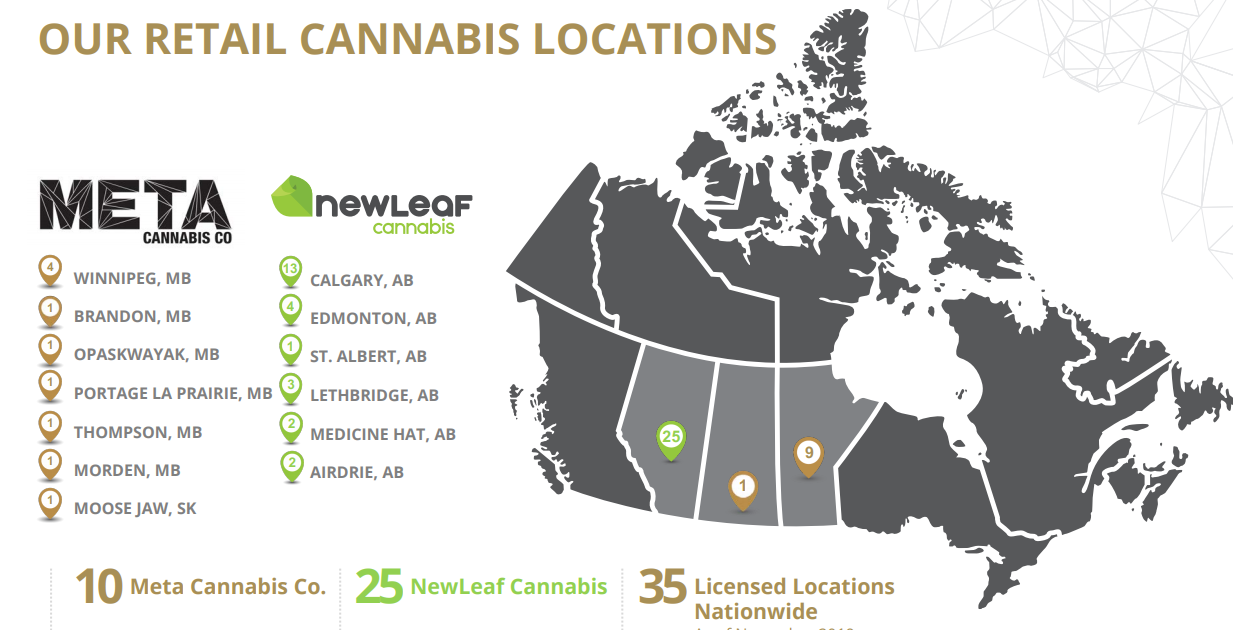 Meta Growth had $8 Million in Cash and cash equivalents as of May 31st 2019 however the company did have a considerable amount of convertible debentures. They recently extend the maturity on its $9 Million convertible which was set to mature on December 14th 2019 and was subsequently extended to December 31st, 2022. Additional information that should be noted is that on the investor’s presentation its states that META has $21.1 Million convertible notes that come due in two years on November 30th 2021 at a convert price of $1.08. It will be interesting to see how the company intends to deal with their convertible debenture as maturity approaches. Meta has reported impressive revenues of $17 Million with gross profits of $5.5 Million.

On October 15th, META announced that they generated over $60 Million in retail sales in the first year of legalization. These are no doubt impressive numbers for a growing industry and as they continue to generate more revenues going forward, then they should not have an issue paying back the convertible notes. Moreover, META also states that its target is to have 40 operating stores by the end of 2019. This means that META would be opening an additional five (5) stores within the next 30 days or so. Depending on the location this could drive more serious revenue for the company and these developments may serve to be good catalysts to look out for. By the end of the fiscal year 2020, META intends to roll out a total of 95 stores which, if executed, would represent ten (10) more stores then Fire & Flower for the year.

Both Fire & Flower and META are great cannabis retailers with a growing footprint. However, we do like how Fire & Flower is more diversified in Canada albeit not by much. We also favor Fire & Flower due to the financial support from retail giant Alimentation Couche-Tard. Ontario will be an important market for both companies to increase their footprint and garner more market share as Ontario is home to 14 Million residents which makes it the most important market to penetrate into the country. Investors looking to allocate in Canadian cannabis retailers cannot go wrong with either and perhaps even diversifying into both can be quite strategic since META’s lower share price means it’s easier to achieve higher percentage gains, however META does has 189 Million shares outstanding as compared to Fire & Flowers 122 Million shares outstanding. Although, on a fully diluted basis META will have 206 Million shares whereas Fire would have north of 300 Million shares outstanding. With the information provided above, we like both corporations very much however the equity stake provided by a global retailer such as Alimentation Couche-Tard does make tend to favor Fire & Flower over META.

Forward Looking Statements: This article may contain "forward-looking information" (as defined in applicable Canadian securities legislation) that is based on expectations, estimates and projections as of the date of the content is published on this website. Wherever possible, words such as "anticipate", "believe", "expects", "intend" and similar expressions have been used to identify these forward- looking statements. Information in this article has been furnished for your information only, is accurate at the time of posting, and may be superseded by more current information. Except as required by law, we do not undertake any obligation to update the information, whether as a result of new information, future events or otherwise. This article should not be considered as personal financial advice. Full Disclosure: The company’s mentioned in this article are not paid clients of Equity Insight. Directors of Equity Insight may buy, hold or sell the securities before during or after this publication.