In one of the most crucial bullish signals for investors, Kontrol Energy has aggressively been buying back its own shares on the open market. Since August 15th 30,500 shares have been bought back and returned to treasury. The average shares purchased by Kontrol Energy during the last two weeks of August are at an average price of $0.64 cents per share. It is equally important to note that the CFO Mr. Claudio Del Vasto has also bought 5,000 shares at $0.67 cents and CEO Mr. Paul Ghezzi has added 14,000 shares at $0.66 cents and now currently holds 5,918,500 shares. After viewing Sedi, Mr. Paul Ghezzi bought an additional 18,850 shares of Kontrol Energy at $0.64 on September 5th, (not pictured below) which brings his new total to 5,937,350. This bullish activity signals that the Company and insiders firmly believe it is undervalued. 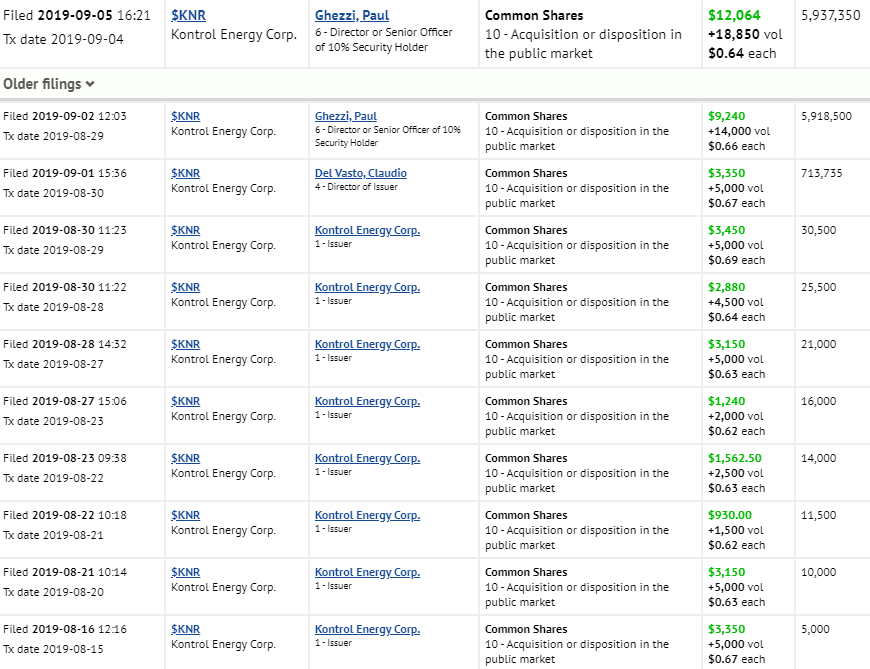 During the Q2 1029 conference call, we noted that the company has a strategic objective to complete a big board up listing to the Toronto Securities Exchange from the Canadian Securities Exchange in 2020 as market conditions permit. This is an extremely bullish move as it primes the Company to grab the attention of institutional investors who would not otherwise look at issuers on the junior exchanges. We expect the move from the CSE to the TSX is slated to take place sometime in 2020 and when announced, these developments are sure to propel the Company’s share price as larger players will be seeking positions in a stock that is relatively thin.

On September 3rd 2019 the Company provided an operational they stated that its current acquisition of a Canadian energy company originally announced on March 14th 2019 is on track to close during Q4 of 2019. The acquisition target has average revenues over the last 3 years of $6,500,000 and EBITDA of $700,000. The Canadian energy company has also a footprint in the cannabis industry and as the company has had a contract in the burgeoning cannabis industry in Canada. When concluded Kontrol will have fourth subsidiaries that are involved in the cannabis industry which positions it as one of the global leaders in the sector.

Secondly, Kontrol Energy has also stated that the company is expected to provide an updated version of the company’s SmartMaX Gateway, SmartSite and SmartSuite technology and KNR anticipates launching its newly updated technology in November of 2019. The upgrade to the technology platform will provide Kontrol with the opportunity to accelerate their Software as a Service (“SaaS”) revenues and recurring revenues from software which are valued at a higher multiple.

Lastly, in the operational update Kontrol mentioned that they are expanding into the plant-based protein sector through Kontrol's wholly owned operating subsidiary, CEM Specialties which specializes in the installation and integration of process improvement and monitoring equipment and technology. CEM Specialties or (“CEM”) is a Canadian energy company which is wholly owned by Kontrol Energy and is an important asset under KNR’s growth of subsidiaries. CEM also plays a major role in the Cannabis industry as a provider of odor reduction compliance and energy efficient services. Kontrol already has the trust and business of many large blue chip including Td Canada Trust (TSX:TD) Brookfield Asset Management (TSX:BAM.A) Telus (TSX:T) WestJet (TSX:WJA) and Enbridge (TSX: ENB) We would expect that KNR would be working with a high caliber client in the plant-based protein industry. We would also expect news of a contract pretty soon.

Forward Looking Statements: This article may contain "forward-looking information" (as defined in applicable Canadian securities legislation) that is based on expectations, estimates and projections as of the date of the content is published on this website. Wherever possible, words such as "anticipate", "believe", "expects", "intend" and similar expressions have been used to identify these forward- looking statements. Information in this article has been furnished for your information only, is accurate at the time of posting, and may be superseded by more current information. Except as required by law, we do not undertake any obligation to update the information, whether as a result of new information, future events or otherwise. This article should not be considered as personal financial advice. Full Disclosure: The company Kontrol Energy Inc. is not a paid client of Equity Insight. Directors of Equity Insight may buy, hold or sell the securities before during or after this publication.