HPQ Silicon: Undervalued, underappreciated and getting ready to explode

HPQ Silicon: Undervalued, underappreciated and getting ready to explode


HPQ Silicon Resources Inc. (TSX-V: HPQ) was incorporated in 1996, and is currently headquartered in Montreal, Canada. The Company has operated under several different names during its history, as they initially filed their prospectus on December 17th, 1998 under the name, Arca Explorations Inc. The company would operate under the names Pro-Spect-Or Resources Inc. until ~ Jan 14, 2007, and Uranium Bay Resources Inc. & Uragold Resources until July 11, 2016 when it took on its current name, HPQ Silicon Resources. A recent interview by Equity Insight with Bernard Tourillon, CEO of HPQ goes through how the Company pivoted to its current form.

Since its inception, the company has been focused on acquiring interests in mining properties in Quebec, that are currently in the exploration phase. Obviously, this business focus requires material upfront capital to fund acquisitions and support operating losses, until exploration can yield positive results and generate cash flow. In recent years, the Company’s focus has shifted from a focus on gold exploration to include quartz exploration. The Company evolved from mineral exploration to quartz refinement and their PUREVAPTM technology, with partners, PyroGenesis.

In total, the management team and board of the Company, owns ~9.7% of shares outstanding (10.5% Fully Diluted). The ratio of insider ownership should provide a considerable amount of comfort that management is adequately aligned with investors.

In a recent interview, the CEO of PyroGenesis, Peter Pascali, was quoted as saying “we see this huge disconnect between everything we have been doing, the significant de-risking that was completed, and the shares stayed the same, so we said if no one else is going to buy more of this, we will”. Obviously, PyroGenesis is invested in their partnership with HPQ Silicon, owning 9.7% of shares outstanding (12.5% Fully Diluted). 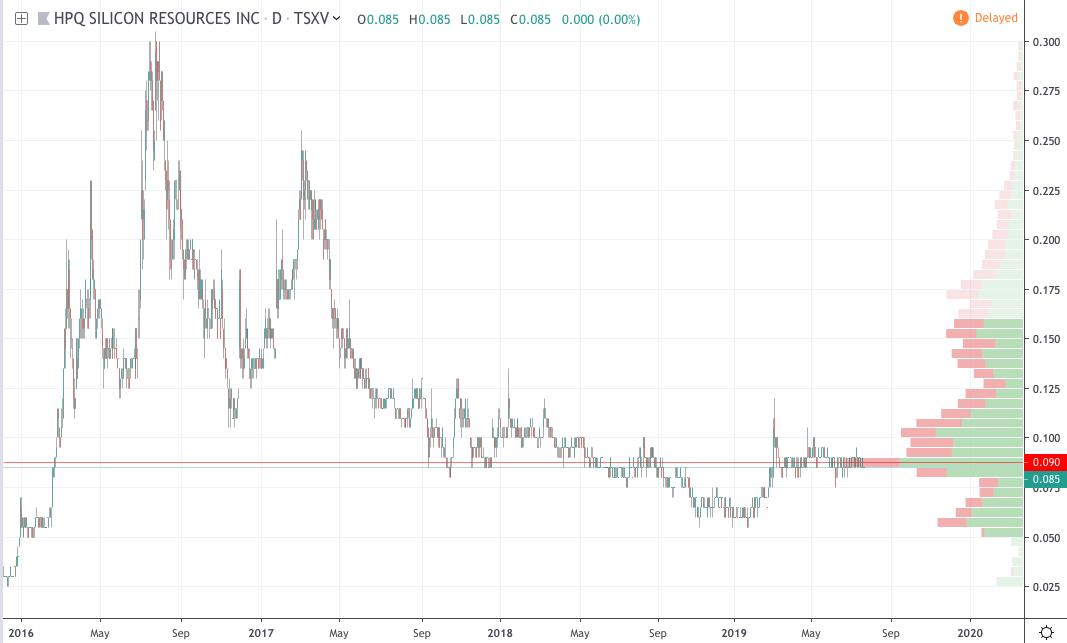 Operating as an R&D company, HPQ Silicon has not currently reached the point at which it would create revenues although they believe they are close with the 2019 commissioning of their pilot plant.

Pre-revenue companies can be tricky as they are primarily evaluated on future potential. However, one may look at Price to Book Value ratios, while also assessing the current state of the balance sheet and the likelihood of success at the Company’s current projects.Below is a concise list of other Canadian technology companies who are focused on a variety of industries, processes and end uses for materials. Also displayed are their valuations:

It seems clear that HPQ is trading a valuations that are much lower than anything in it’s peer group and represent relative value to investors.


We believe that any of the below milestones may provide the necessary catalyst for the market to appreciate HPQ and spark a bull run on the stock:

Forward Looking Statements: This article may contain "forward-looking information" (as defined in applicable Canadian securities legislation) that is based on expectations, estimates and projections as of the date of the content is published on this website. Wherever possible, words such as "anticipate", "believe", "expects", "intend" and similar expressions have been used to identify these forward- looking statements. Information in this article has been furnished for your information only, is accurate at the time of posting, and may be superseded by more current information. Except as required by law, we do not undertake any obligation to update the information, whether as a result of new information, future events or otherwise. This article should not be considered as personal financial advice. Full Disclosure: The company HPQ Silicon is a paid client of Equity Insight and directors of Equity Insight may buy, hold or sell securities before, during or after this publication. The company.