Technology Stocks to Watch in July

Technology Stocks to Watch in July

Lately we have been watching the seismic shift in the technology sector as summer is approaching and small cap investors are looking at sectors away from cannabis stocks which have sold off by 50% or more since the highs in January. Many cannabis stocks may be headed lower before a bottom is put in or some of the weaker companies may see newer lows. Although this can give a buying opportunity as value investors step in, we have noticed that there is strength in stocks associated in the technology sector related to cannabis, agriculture, solar energy and batteries.

Three stocks that are showing relative strength in the small cap space that have not been beaten down, appear to be stable and who have catalysts coming up.

HPQ Silicon Resources (TSX-V:HPQ) is focused on becoming the lowest cost producer of Silicon Metal and High Purity, Solar Grade Silicon Metal (SoG Si) in the world. HPQ has been quietly been working away on their patented process with PyroGenesis (TSX-V:PYR) for a one step method of transforming Quartz in to high purity silicon which is poised to be a major disruptor in the solar and battery industries.

The global solar energy market is forecasted by Deutsche Bank to grow 10x by 2035, making it a US $400 Billion industry. The SoG Si market alone is expected to grow from US $7.1B to US $11.8B by 2028. The addressable market for ultra-pure Si is enormous and the applications are growing beyond just solar. Although not commercialized yet, we know that silicon could replace Lithium in batteries - that is massive!

However, Silicon Metal is not economic today. In the last 6 years, the spot prices of polysilicon ("SoG-Si") dropped from US $25/kg to less than US $10/kg. At US $10/kg not even the new high-performance plants built in China, with their all in cost around US $14/kg are profitable. It is not logical for anyone to continue operating at a net loss for a long period. For this market to evolve and the above growth rates to occur, someone has to lower the input cost of the main ingredient. HPQ is that someone.

In June 2016, the first successful lab scale tests confirmed the game changing potential of the process. Not only did the technology operate as designed, but also showed, the ability to transform Quartz into high purity Silicon Metal (Si) exceeding 99.9+% Si “3N” - a game changer in the solar industry.

On May 23, 2019 HPQ demonstrated to the market that the Gen2 of the technology is performing great and it may dramatically undercut the competition. The Pilot Plant is now under construction.

HPQ stated on June 4th that the Pilot Plant was delayed but none the less expected to be operational in the summer months and that the testing program, including plant commissioning, will start in Q4.

On June 17th HPQ stated that their process can use extremely low grade input material and put out an extremely high grade finished product - this is not industry standard. HPQ is suggesting that they may be able to cut industry costs by 30% or more while lowering CO2 emissions by 96%.

Going into the summer, after 2 years of being relatively quiet, we expect HPQ to release information about what their system can deliver, what industries it may disrupt and who may be buying their product.

In our recent interview with HPQ, the Company stated that the goal for the Pilot Plant is to show the industry and investors that they can produce a consistent, ultra-high quality product at scale and sell it. HPQ intends to ship samples to clients for the Gen2 and allow them to pre-order product.

Investors who are unsure about the continued growth in the solar sector may want to look at the Invesco Solar ETF as a measure of sentiment in the solar sector. In our recent article “Cracking the Code of Solar” we highlighted that investors should keep an eye on (ARCX: TAN) at the price of USD $25.95. Now a month later, the Invesco Solar ETF is now trading at USD $28.12 and could very well breach the $30.00 mark in July. With the growth occurring currently in the Solar sector and with future demand of Solar energy set to increase, HPQ Silicon is in a very good position to supply the demand for high-purity Silicon metal (+4N) through HPQ’s proprietary PUREVAP™ process. 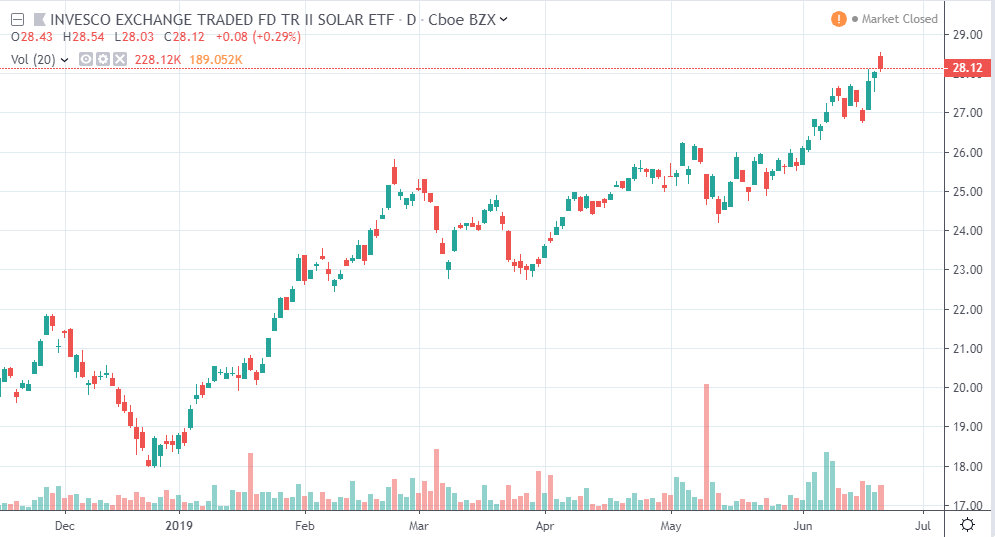 Kontrol Energy Corp. (CSE: KNR) (OTCQB: KNRLF), a leader in the energy efficiency sector through IoT, Cloud and SaaS technology, has been delivering significant shareholder value, recently becoming cash flow positive and delivering significant news flow. There are several catalysts that investors should look for as we enter the month of July. First, Kontrol has recently announced a private placement of $4,000,000 in the form of convertible debentures. This financing will be used to complete acquisitions, expand into the US market through its Smart Factory platform and for general corporate purposes. At the time of writing the stock is trading at $0.76 and the conversion is set for approximately 33% higher at $1.05. The press release indicated h that the initial closing is targeted for July 4th 2019.

This is an interesting date to complete a financing because July 4th is a holiday in the US market with the exchanges closed, however, Canadian markets remain open and this could result in an arbitrage short. This means that those who would be short on the US exchange would need to cover with shares listed in Canada as a means to cover their short positions. Although this is not always the case, this is an interesting scenario that investors should pay attention to regardless of the company or ticker symbol as catalysts announced during a holiday on a dual listed security can pose a significant opportunity for investors as shorts are forced to cover.

Another catalyst we are looking forward to is the closing of the acquisition Kontrol announced on June 4th of a Canadian energy company. According to unaudited reports, this Canadian energy company has generated revenues of approximately $6.5 Million and $700,000 in EBITDA over the last three years. The closing of this acquisition would also increase Kontrol’s operations in the cannabis sector as this unnamed energy company is working with firms in the space. This would be KNR’s fourth subsidiary to have a growing interest in the cannabis industry in Canada.

Shares of NuRAN Wireless (CSE: NUR) (OTC: NRRWF), a leading supplier of mobile and broadband wireless infrastructure solutions, have been in a steady accumulation phase as of late and have been trading good volume in the $0.06 to $0.075 range. It is apparent that investors are taking notice and accumulating the stock as major developments are expected to be released shortly.

We believe that the accumulation is directly correlated to the much-anticipated closing and announcement of contracts which have previously announced to the market. In May, NuRAN Wireless released a press release which stated that it is expected to close a new contract worth CAD $4 Million with an unnamed mobile network operator (MNO).

Secondly, NuRAN has also stated that they have encountered scheduling delays for their recent trials in Kenya and anticipates completion of the trials by its third quarter (Q3). These trials in Kenya once completed, would further position NuRAN as a leader in telecommunications in Africa.

Thirdly, it is also interesting to note that when asked if NuRAN is expected to close additional contract in the short or midterm, NuRAN has stated that the company is currently working on a large number of contractual opportunities which NUR has already submitted proposals and are currently pending selection or are in the negotiation stage. NuRAN believes that the company is well positioned to be awarded these contracts in the coming months. Deals with large entities do tend to take longer as there are many steps of approvals between both companies and its board members. We would expect that the closing of the $4 Million contract with the MNO to be the beginning of a slew of developments as operationally NuRAN Wireless is firing off on all cylinders.

Furthermore, NuRAN has been working on a major potential contract that would be worth approximately their entire market cap at the current time. The contract with Spacecom’s Amos – 17 which is expected to generate up to CAD $9 Million in sales over the first 12 months and up to a total of ten times the amount, or close to CAD$90 Million over the lifetime is expected to close very soon as it was announced in early 2019. This $9 Million contract for NuRAN is contingent on the completion of a financing of Spacecom and if completed, the initial order will be for a total of 200 sites.

As we conclude, we will be keeping a very close eye on these three technology stocks as we head into July as big developments are expected and shareholders should expect to see significant gains!