Investing in Ancillary Companies in the Cannabis Market

Investing in Ancillary Companies in the Cannabis Market

The cannabis industry in Canada has overcome many transformational shifts over the years, and the industry will continue to shift as the market matures due to a steady influx of cultivators and processors coming onboard. The total number of authorized cultivators, processors and sellers under the Cannabis Act now sits at 180 with more cultivators and processors to receive their application in the near future. As the country continues to increase the number of cultivators, we believe that the next big theme in cannabis investing will be in the “picks and shovels” of the industry such as energy efficiency, odor reduction and irrigation - essential services to have a functioning business. The cannabis industry will at some point see some contraction from the marketplace as it begins to mature and as a result, cannabis companies will need to focus on utilizing technology to reduce their operating expenses (OPEX) to further improve their margins on a per gram basis.

There are two companies we will be highlighting in today’s report, both of which have been breaking ground in the cannabis industry and are flying under the radar of investors!

Kontrol Energy Corp. is a growing leader in the digital transformation of energy management, smart learning and automation in buildings and industries and was named Canada’s 7th fastest growing start-up in 2018. Kontrol Energy has been on a steady track of amazing growth as the Company has recently reported annual revenues of $10.7 million with $6.4 Million in gross profit for the year ending December 31st 2018. Kontrol Energy has achieved a major milestone as the company announced that they are now Cash Flow positive from the first quarter.

Kontrol Energy is assisting cannabis cultivators and processors in Canada for energy efficiency, emission and odor compliance. Kontrol Energy has a total of seven subsidiaries and three of these subsidiaries, Ortech Consulting, Efficiency Engineering Inc. and CEMSI are helping companies in the sector to lower their OPEX and meet emission and odor compliance.

On May 30th, Kontrol announced its fourth contract with a Canadian cannabis cultivator in the province in Ontario. KNR will soon be expanding operations to increase its cannabis vertical as it will be completing an acquisition of an electrical retrofit Company. The acquisition target has generated over $6.5 Million and an EBITDA of $700,000 over the last 3 years. The CEO of Kontrol Energy Mr. Paul Ghezzi stated “The Target has also recently entered the Cannabis sector as a supplier of electrical retrofit and efficiency services”. The acquisition is set to close the first week of July, and once completed, this will be Kontrol’s fourth subsidiary that is actively expanding in the cannabis industry. Investors should be on high alert for the first week of July as this acquisition will serve as a major catalyst and will be sure to add significant shareholder value.

Through its various subsidiaries expanding in the cannabis energy, Kontrol Energy is well positioned to generate additional revenues from their new cannabis vertical with Canada’s leading companies. Due to industry competitive purposes, the names of licensed producers cannot be named, although recently National Inflation Association has connected some very interesting dots in an article titled “KNR Liked by Canopy Growth Executives!”. In this article, NIA has spotted that Executives at Canopy Growth such as Senior Cost Accountant Adam Montgomery, and the Retail Expansion Project Manager Ian Kinney both liked a post on LinkedIn when Kontrol Energy posted a Press Release stating that it is expanding its odour and emission solutions for the cannabis industry. It would be no surprise that Kontrol Energy would be assisting some of Canada’s largest cannabis companies since Kontrol Energy has an established Blue-Chip customer base including, TD Canada Trust, Telus, WestJet, Brookfield, Suncor, Lafarge, Enbridge and most notably the recent partnership with Toyota Tsusho Canada Inc. 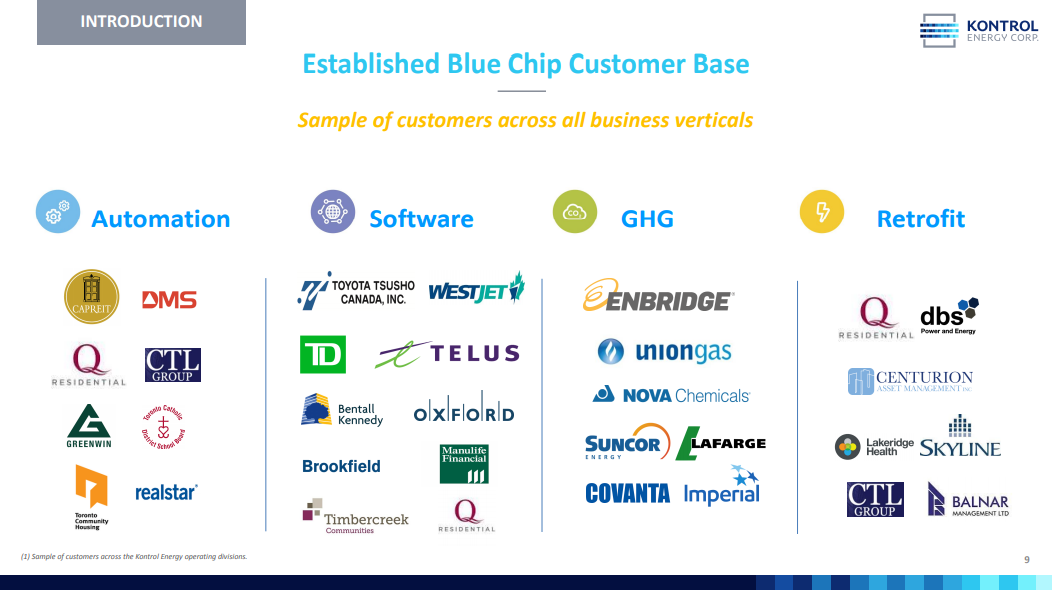 Water Ways Technologies is the parent Company of Irri-Al-Tal Ltd. ("IAT") an Israeli agro-tech firm that specializes in providing water irrigation solutions to agricultural producers. Water Ways is a newly listed on the TSX Venturethat began trading in March through an RTO after a Qualifying Transaction for the acquisition of Irri-Al-Tal Ltd. However, although the Company’s listing is new, the Company Irri-Al-Tal has been around since late 2003.

Water Ways has been expanding its operations in the cannabis industry as the Company gained experience through the delivery of irrigation, fertigation and IoT control systems to a greenhouse cultivation project which is an Israeli subsidiary of Cronos Group (TSX: CRON). In addition, WWT also has a small beta project in Colombia and the company is currently in the process of submitting bids on similar projects to many potential future licensed cannabis producers in the Israeli market as well as other licensed producers in Portugal, Colombia and other countries in Latin America. LATAM is growing in popularity with investors as of late, and if WTT becomes successful in obtaining additional contracts in LATAM, this could be a catalyst that could drive the share price higher.

In Canada, WWT is aiming to penetrate the cultivation market for both cannabis and hemp by establishing ongoing distribution relationships with buyers of irrigations and cultivation equipment. On March 19th 2019, Water Ways signed a Letter of Intent with a Canadian distributor of irrigation and agriculture components near London, Ontario. WWT is intending to establish a wholly owned subsidiary within the Canadian market - the subsidiary will acquire distributor assets to leverage their business relationships within the farming industry. To further penetrate the Canadian cannabis landscape, WWT aims to retain the Distributor’s sales force to expand the marketing and sales of irrigation projects to the increasing needs of cannabis producers. On June 17th, WWT announced that the company has closed its acquisition of certain assets of Heartnut Grove, a Canadian distributor of irrigation and agriculture base in Mount Brydges, Ontario. Heartnut Grove had reported for the year ending October 2018 that the company generated sales of CAD $3.76 Million and gross profits of CAD $692,000, with unaudited sales for 6 months ending April 30th were $2.59 million with gross profits of $524,000. The company anticipates that this acquisition will enable WWT’s expertise and offerings to Canadian farmers and cannabis licensed cultivators.

Water Ways has also recently been engaged for a drip irrigation project for a cotton field located in Uzbekistan which is estimated to be worth $0.5 million and is expected to be delivered in Q2 2019. The Company also expects to deliver other projects in Central Asia this year with an increased focus on the Chinese market.

Revenues of Water Ways are segmented by two categories; Turn-Key Projects and Sales and Equipment. The Turnkey projects consist of design, supply and installation of irrigation which make up 55% of the total revenue and the other 45% stems from equipment sales which include, sales of irrigation equipment assembled in-house & hardware produced by 3rd party OEMs. This model is proving to be quite accretive as the Company reported on May 2nd that it’s annual sales ending December 31st 2018 totaled CAD $15.7 Million for an increase of 14% over the same period last year. In March, Water Ways raised CAD $3.11 million at a price of C$0.25 per unit with half warrants valued at $0.40 cents. At the current share price of $0.145, the financing was done at a 72% premium to market which is extremely bullish.

As the global marijuana market continues to grow over the coming years, we firmly believe that pick and shovel companies such as Kontrol Energy (CSE: KNR) and Water Ways Technologies (TSX-V: WWT) will benefit greatly in this vertical as prices for cannabis begin to fall as cultivators and processors begin to fight for market share.