In today’s article we will look at what developments have transpired since November 2018 at Kontrol Energy and if future accomplishments can merit a rise in the Company’s share price by over 200% as indicted by Fundamental Research Corp which have an estimated Fair Market Value of $2.44. 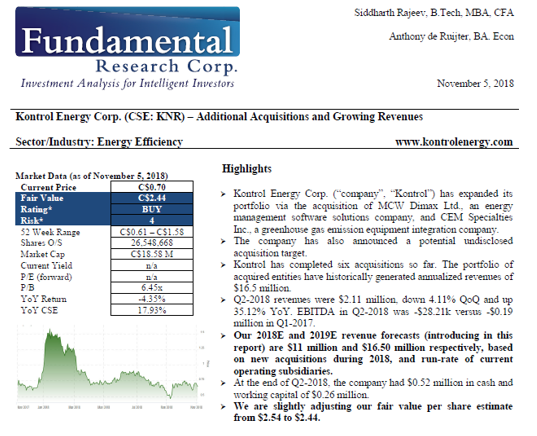 2019 has already proven to be quite an interesting year for Kontrol in the cannabis sector as they secured their third contract with a licensed cultivator based in the province of Ontario. Services being provided by Kontrol’s operating subsidiary, ORTECH Consulting Inc. include providing emission and odor compliance services for the licensed cultivator.

Not only does the cannabis industry consume a lot of energy, there has also been issues in regard to emissions and odor that gets emitted by licensed producers - both problems that Kontrol can help solve. CTV News recently reported that town of Pelham, Ontario has had complaints flagged by its residents. . The mayor of Pelham Mr. Melvin Junkin stated, “It's a two-edge sword right now, As a town we definitely like the jobs... If they can just meet a little bit more halfway on the emissions, light and odour.” Pelham is just one of numerous cities across Ontario which are raising serious concerns on the odor of growing legal cannabis. The Hyde Park Business Association is also reviewing complaints of odor from citizens in London, Ontario about a “skunky smell”.

With concerns of emission and odor on the rise, Kontrol Energy’s subsidiary ORTECH Consulting Inc. and Efficiency Engineering Inc., are well positioned to assist many more licensed cultivators in Canada to mitigate these issues, which are growing in cities across the nation. With 3 contracts in place, we believe that Kontrols’ cannabis vertical will add additional revenue to its bottom line as more companies look to reduce their odor and emissions, but also minimize the cost per gram grown as cultivators look to reduce their energy consumption.

In a press release dated January 14th Paul Ghezzi, CEO of Kontrol Energy. stated “Energy costs continue to be a primary concern for Licensed Producers, however emission and odour compliance are increasingly important as municipalities update their requirements.” For industry competitive purposes, the names of LP’s have been withheld. Although the names of LP’s have been withheld, we are looking at the Big 5 as potential clients.

It is unclear what the financial impact to the bottom line the cannabis vertical will be for Kontrol will be but, given that it is a blue-sky sector riddled with issues to solve, we feel that the impact and growth could be very material. If Kontrol manages to carve out a niche business in the space, they could be the go-to brand and be able to cross sell all their products and services.

On March 14th 2019, Kontrol Energy announced its 7th possible acquisition, a leading provider of electrical retrofit services company. The undisclosed acquisition target has provided high quality value added electrical efficiency services for over 15 years in the Canadian marketplace and over the last 3 years the company has generated over $6.5 Million in revenue with an EBITDA of $700,000.

Growth by acquisition, or a “roll-up” strategy, is a great way to drive additional revenues to the bottom line and increase shareholder value. The roll-up strategy is proving to be accretive as, on March 21st Kontrol Energy said it is targeting a run rate of between $32 to $33 Million for the end of 2019 or approximately $1.00 per share in revenue. This is very impressive for a company whose market capitalization is approximately $20 Million and further demonstrates just how undervalue Kontrol Energy is.

Kontrol could be in a position not only to deploy solutions across hundreds of thousands of square feet of assets in the Canadian operations but could be in a spectacular position to get contracts for other Toyota assets in North-America.

In December, Paul Ghezzi, CEO of Kontrol Energy sat down for an interview Stuart Smith of Network News Wire to discuss the companies revenue and growth strategies. There a few important key points which investors should highlight as what to expect from Kontrol Energy in the future. First notable key point is that Kontrol Energy aims to be cash flow positive in Q4 of 2018. CEO Paul Ghezzi was quoted “Revenue growth has been amazing and when investors see us turning cash flow positive, that will be the next milestone. the next goal for us would be to become an attractive take out target or a mid-cap that pays a healthy dividend and continues to grow.”

Fourth quarter financials are due to be released on April 30th and KNR also expects to report revenues north of $4 Million dollars based on its current existing order book as noted in a press release dated November 18th 2018. This represents a possible increase of 66% from the previous quarter as Q3 reported revenues of $2.4 Million dollars. Considering that the current operations continue growing at Kontrol, considering that they are developing new business verticals in blue sky industries like cannabis, considering that they keep making acquisitions that compound the top and bottom line, considering the massive contract they just got with Toyota, it seems perfectly reasonable to thing that KNR could trade up 211% to $2.44 from today’s closing price of $0.79. 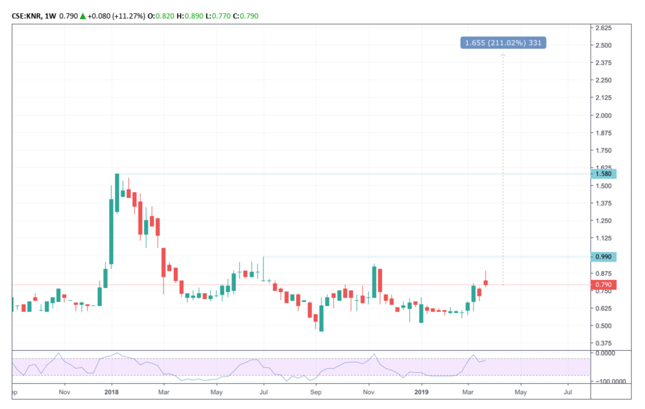 Forward Looking Statements: This article may contain "forward-looking information" (as defined in applicable Canadian securities legislation) that is based on expectations, estimates and projections as of the date of the content is published on this website. Wherever possible, words such as "anticipate", "believe", "expects", "intend" and similar expressions have been used to identify these forward- looking statements. Information in this article has been furnished for your information only, is accurate at the time of posting, and may be superseded by more current information. Except as required by law, we do not undertake any obligation to update the information, whether as a result of new information, future events or otherwise. This article should not be considered as personal financial advice. Full Disclosure: The company Kontrol Energy Inc. is not a paid client of Equity Insight. Directors of Equity Insight may buy, hold or sell the securities before during or after this publication.