Lion Electric Co. (TSX: LEV) (NYSE: LEV) is a manufacturer of medium and heavy electric vehicles which includes all electric school buses, urban transit vehicles, urban commercial trucks and minibuses. LEV currently has over 800 vehicles on the road and have cumulatively travelled more than 10 Million miles.

At full scale, Lion Electric has the capacity to produce 2,500 vehicles at its 200,000 sq.ft manufacturing facility located in Saint-Jerome, Québec. The facility also serves as its R&D center and its Canadian corporate headquarters. On July 1st, 2021, LEV entered into an interest-bearing secured loan with Investissement Québec, with the IQ Loan providing up to CAD $50 Million in financing. The loan from Investissement Québec is an effort from the Provincial government of Québec to support a planned battery manufacturing plant and innovation center. The loans provided by the government is a huge show of support for Lion Electric’s innovation and planned expansion in becoming a dominant player in the EV space.

At the heart of every electric vehicle lays the most crucial component for any EV is the battery, and with supply shortages and rising costs for raw materials, having access to a battery factory is critical for any EV maker. This is why LEV is already constructing its Lion Campus, a battery factory and innovation center located in Mirabel, Québec, not far from the Mirabel Airport. Once completed, LEV will become the first Canadian manufacturer of electric vehicles that will have its own battery packs and modules. The battery packs that Lion Electric currently uses are from Romeo Power and BMW.

Lion Electric is also in the final stages of building out its highly-automated, 900,000 sq.ft US manufacturing plant located in Joliet Illinois and is projected to have a production capacity of 20,000 vehicles per year.

On November 2nd 2022, LEV announced that it has completed the production of its first zero-emission LionC school bus at its US facility. The General Manager for the Joliet facility Mr. Eric Pansegrau stated “We are excited to now be entering the ramp-up phase of production, with an initial focus on the all-electric LionC school bus. We will spare no effort in the gradual scale-up of manufacturing, which we anticipate will be spread out over the next few quarters.”

The LionC is LEV’s all-electric school bus that can seat up to 77 passengers, has a top speed of 60 mph or 100 kph and travel anywhere between 100 to 155 miles per charge, and depending on the charging type, charging times can vary from 2.5 hours to 11 hours.

A growing number of companies are seeking out new innovative technologies like zero-emission buses and trucks for their operations as mounting pressures from governments around the world aim to reduce pollution and tackle climate change. With the rise in fuel prices during the pandemic, the switch to electric vehicles for companies is becoming increasingly appealing for companies as they look to cut emissions and save on costs. With that being said, this has presented LEV with a great opportunity in securing partnerships with major retailers such as Amazon, IKEA and SAQ, the Québec provincial liquor board. Other clients of LEV include Canada Post, Transport Canada, Hydro Quebec and C&S Wholesale Grocers to name a few. 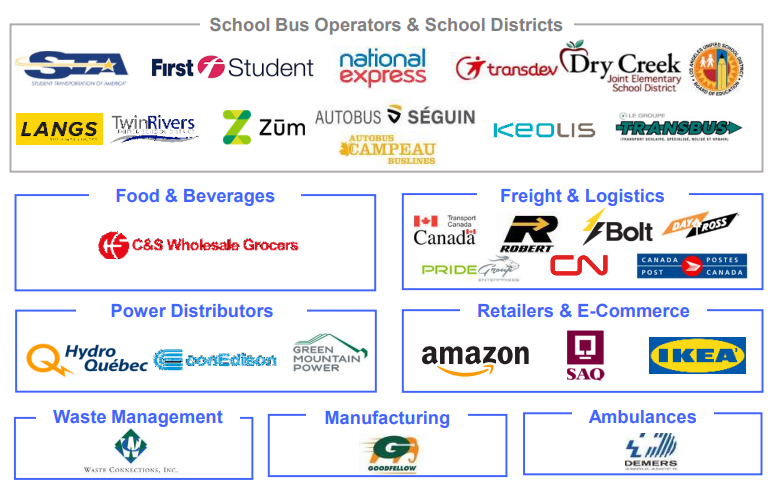 For its third quarter ending September 30th, 2022, LEV delivered a total of 156 vehicles totaling over USD $41 Million or CAD $54.37 Million in revenue, up USD $29.1 Million from the Q3 the year prior. During its third quarter, USD $24.5 Million was generated in Canada while USD $4.9 Million came from its US customers. Of the 156 vehicles sold, 140 vehicles were for the Canadian market and 16 vehicles for the United States, making the Canadian market accounting as major source of its current sales. LEV’s current order book is estimated to be valued at approximately USD $575 Million comprised of over 2,408 vehicles with 2,085 being all-electric buses and 323 all-electric trucks. 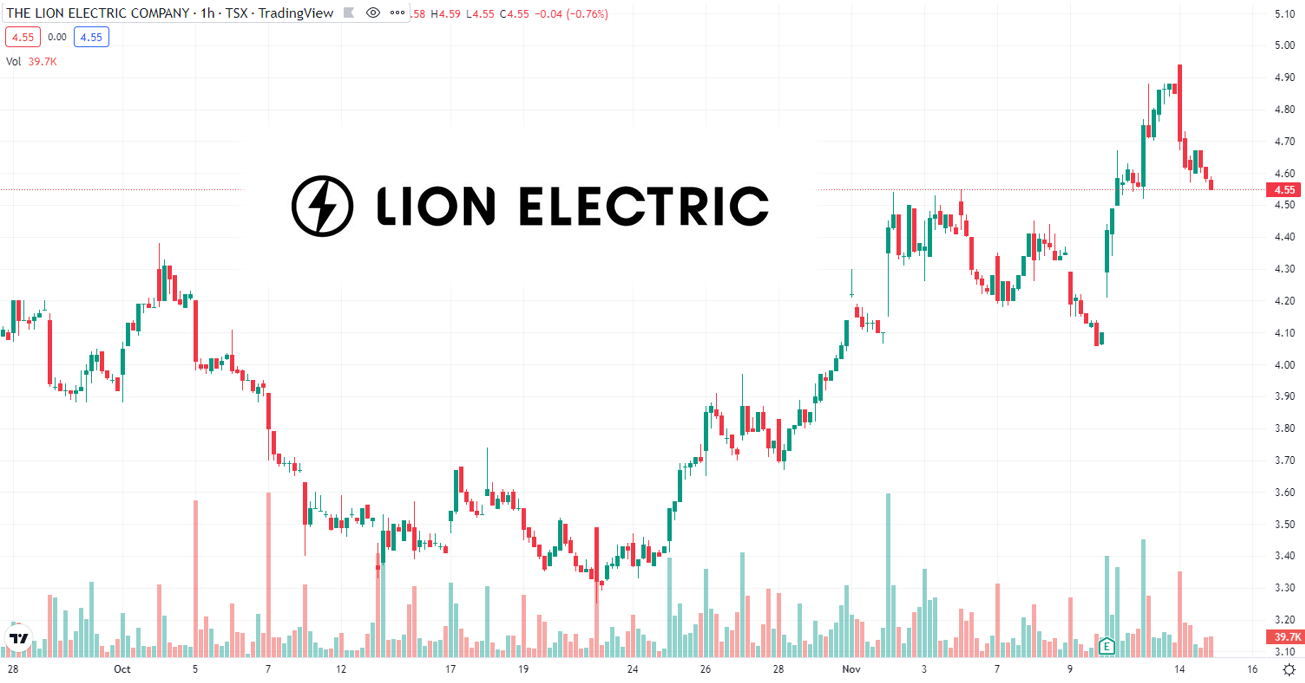 From manufacturing electric vehicles, building out and installing charging stations and developing its own battery plant, Lion Electric is creating its own ecosystem to electrification of transportation in North America, you just might see new EV busses coming to a community near you!

Founded in 2008, Vicinity Motor Corp. (TSX-V: VMC) (NASDAQ: VEV) is a Canadian manufacturer and supplier of electric vehicles for both commercial and public use across Canada and the United States. VMC currently has 3 manufacturing facilities across British Colombia, Washington state and Indiana where the company manufactures Class 3, 4, 5, 6, 7, medium-heavy duty trucks as well as fully electric buses.

Similar to Lion Electric, Vicinity Motor Corp. has a fleet of 700 transit buses on the road, only 100 less than LEV, although VMC eclipses LEV in terms of miles driven as VMC has 15 times more miles driven, 150 million miles, compared to LEV’s 10 million miles. Over its 14 years of operation, VMC has gained notable customers such as BC Transit, Calgary Transit, Edmonton Transit, Saskatoon Transit, ABC Companies and Porter Airlines.

In October, VMC secured a large USD $100 million purchase order from Pioneer Auto Group, and consists of 1,000 electric trucks, namely VMC’s 1200 Class 3 model. The CEO of VMC William Trainer stated "We started manufacturing this vehicle in Canada and expect to shift to our new facility in Ferndale, Washington, which can accommodate both buses and trucks, by year-end. Given the simplified assembly of the VMC 1200 as compared to a transit bus, Ferndale truck capacity could reach 10,000 vehicles per year. Due to the fact we are not facing significant pressures in the VMC 1200 supply chain specifically, the VMC 1200 will prove to be a significant contributor to our 2023 revenue growth and profitability - enabling our goal of creating sustainable, long-term value creation for our shareholders,”.

VMC will be reporting their quarterly financials after market close on November 15th 2022 at 4:30 and investors are encouraged to participate in the company’s conference call. Vicinity Motor Corp. announced their second quarterly results back in mid-August, with VMC reporting approximately USD $11.7 million for the 3-months ended June 30th 2022, however gross profits were just above $1 million. According to the company’s corporate presentation, VMC’s total order book is approximately ~1,300 vehicles or USD $150 Million or CAD $198.8 Million.

Municipalities across Canada and the United States are placing more emphasis on replacing transit vehicles with new zero-emission options. Most recently the committee for the city of Calgary endorsed a proposal which will soon be heading to city counsel for the approval of $491 million plan which would see the purchase of 259 electric buses and other associated costs. Other cities such as Fredericton are starting to replace their aging fleet of buses to more hybrid and electric, with Fredericton eliminating the purchase of diesel buses and is aiming to reduce carbon emissions by 50% over the next 8 years.

VMC has a smaller share structure of only 44 Million, compared to LEV’s 194.7M shares outstanding. In conclusion, although LEV does outpace VMC in terms of revenue, we view LEV to be a bit overvalued as LEV’s market cap approaches $1B compared to VMC whose market cap sits at only $70.89 Million, more than one tenth of LEV, with nearly identical numbers of vehicles on the roads today. For VMC, we would like to see the order book convert into deliverables which would convert into revenues, however with the growing demand for electric vehicles on both sides of the border, both LEV and VMC should see an increase in purchase orders in 2023. 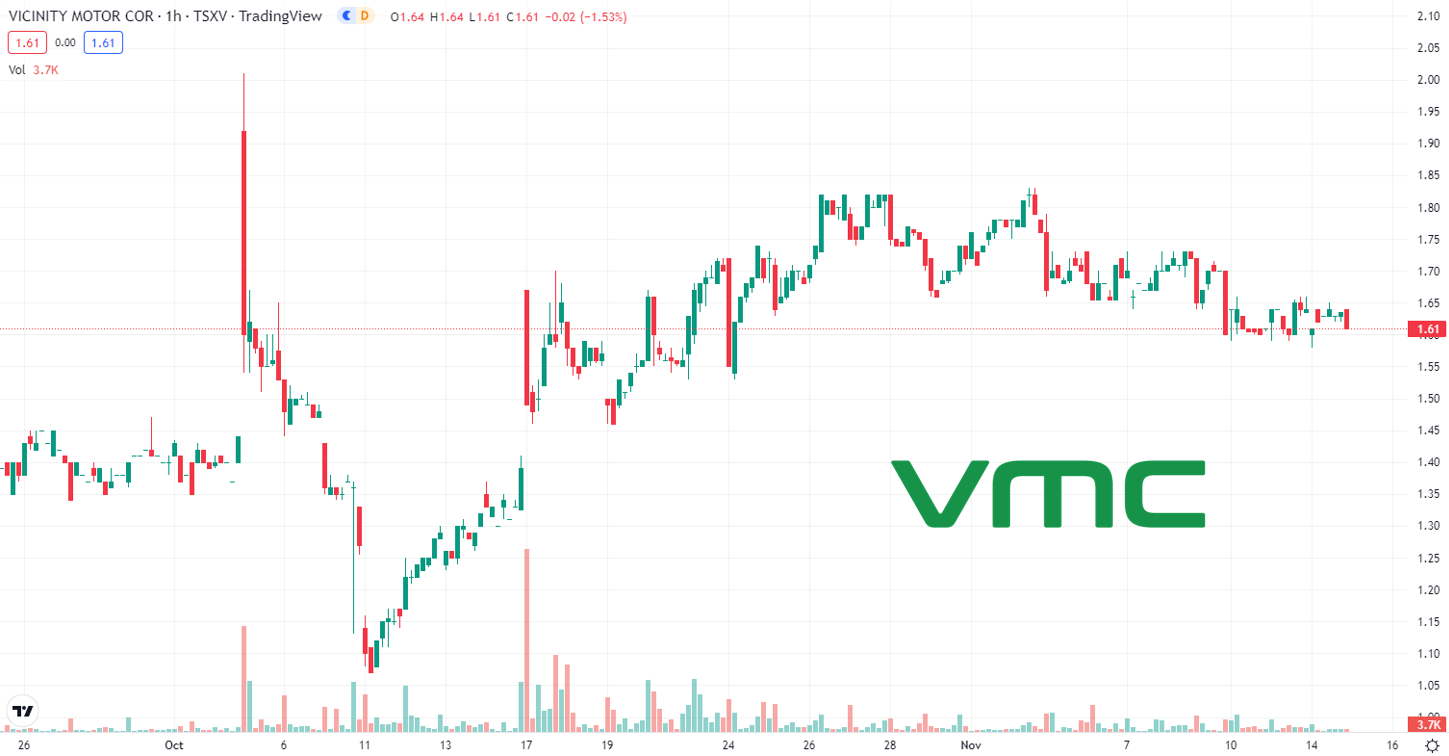 Forward Looking Statements: This article may contain "forward-looking information" (as defined in applicable Canadian securities legislation) that is based on expectations, estimates and projections as of the date of the content is published on this website. Wherever possible, words such as "anticipate", "believe", "expects", "intend" and similar expressions have been used to identify these forward- looking statements. Information in this article has been furnished for your information only, is accurate at the time of posting, and may be superseded by more current information. Except as required by law, we do not undertake any obligation to update the information, whether as a result of new information, future events or otherwise. This article should not be considered as personal financial advice. Full Disclosure: None of the companies mentioned in the article are clients of the parent company of EquityInsight.ca Directors of the parent company of EquityInsight.ca may buy, hold or sell the securities before during or after this publication.