4 Stocks To Watch In June

4 Stocks To Watch In June 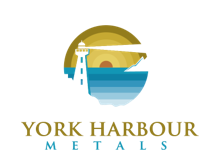 York Harbour Metals (TSX-V: YORK) (OTC: YORKF) is an exploration and development company that is focusing on the exploration and drilling of the historic York Harbour Copper-Zinc Project located in York Harbour, Newfoundland. Shares of YORK have been steadily increasing over the past year, rising over 310% as the project roadmap is being completed in a timely manner through a phase-by-phase approach. This rise in price wasn’t achieved through a sudden swing upwards, but rather a long climb following positive corporate developments.

YORK hit an all-time high of $1.49 per share before falling back down to nearly $1 as the broad market faced uncertainties regarding interest rates, which has therefore put pressure on more speculative equities.

Although the company is pre-revenue (most early explorers are) this could change in the future as the project has been going through multiple phases and announcing interesting drill results which could potentially lead to full production. Also noteworthy is the fact that YORK has no debt!

One of the most intrinsic ways to measure investor confidence is to observe the continued accumulation and amount of stock owned by insiders. There are many reasons to sell a stock, but there is only one reason to buy. Confidence.

Alongside the growing development at York Harbour Metals, there has been significant insider buying from an individual by the name of Blair Naughty. At the time of writing, Mr. Naughty has purchased an additional 510,300 shares of YORK totaling almost a whopping $420,000 just in the month of May alone! Mr. Naughty currently holds 6,837,100 shares of YORK. An investment currently worth $7.8 Million dollars at its market price of $1.15.

In April, YORK provided investors with an update to its Phase 3 diamond drilling program at its York Harbour Copper-Zinc Project which resulted in completion of 28 NQ-size diamond drill holes totaling 4,980 metres and have highlighted that analytical and assay results from their Phase 3 drilling program is expected “shortly”. With more than a month that has passed with no drill results as of yet, YORK may very well announce its Phase 3 results in June.

Chairman of YORK Mr. Bruce Durham stated “Phase 1 & Phase 2 drilling programs have successfully identified, delineated, and discovered several copper-rich and zinc-rich mineralization lenses in the Main Mine Zone. The systematic drilling in Phase 3 was to infill the Main Mine Zone and begin our expansion of the 400-metre strike length. With the Permit in place, we can aggressively continue our drilling program to further expand both along strike and at depth.”

The continual purchases of YORK shares by insiders as the company approaches the announcement of additional drill results is extremely bullish in our view, and these upcoming drill results may very well be the catalyst that pushes YORK to new 52-week highs!

Another stock investors should be paying close attention to for the month of June is an undervalued biotech company, Awakn Life Sciences (NEO: AWKN) (OTCQB: AWKNF). On May 19th 2022, AWKN announced that the company has completed the world’s first Ketamine study targeting a variety of behavioral addictions which includes Binge Eating Disorder, Internet Gaming Disorder, Compulsive Sexual Disorder and Gambling Disorder. CEO of AWKN Mr. Tennyson was quoted "This study is hugely encouraging and gave us all the data we could have hoped for. Critically, it also showed us that a larger study is merited, and we will now pursue this. For such a huge cohort of over a billion people to be suffering with no pharmacological treatment available to them, is unacceptable and we will strive to deliver therapies to patients who are in desperate need".

In a recent interview conducted by Psychedelic Invest, it was stated that the company has applied for a grant with the UK government for its Phase 3 clinical trials, and if successful, would cover approximately two-thirds of the cost of its Phase 3 clinical trials which could be made possible due to their partnership with the University of Exeter and the National Health Service.

Although Awakn Life Sciences is not currently included in any of the psychedelic ETF’s as of yet, we believe that AWKN could be included in one of the three ETF’s later this year as the company continues to accomplish many of its milestones and its growth will no longer go unnoticed! As shares of AWKN begin to rise out of its 52-week low, investors will want to keep Awakn Life Sciences (NEO: AWKN) (OTCQB: AWKNF) on their radar for the second half of 2022 as multiple developments are underway!

One stock that we wrote about in February that has since risen 40% from our publication when we alerted investors, is none other than Atlas Salt (TSX-V: SALT)!

Atlas Salt engages in acquiring, evaluating, exploring, and mining of salt, gypsum, potash and other mineral deposits. SALT is now in the late stages of its feasibility study for its Great Atlantic deposit located in Newfoundland and shares of SALT continued its break out hitting an all-time high of $2.34 yesterday, on the back of an announcement last week stemming from its ground gravity survey at its 100% owned Fischell’s Brook Salt Dome which is to contain a much larger deposit than originally believed.

SALT also hinted that the NI-43-101 resource assessment of Fischell’s Brook which is being conducted by APEX Geoscience Ltd. is expected to be completed by the first half of June! The President of SALT Mr. Rowland Howe was quoted, “The salt endowment of the Bay St. George Basin is increasingly impressive given this new information regarding Fischell’s Brook combined with data from our ongoing Feasibility Study at our flagship Great Atlantic Project, 15 km to the northeast”. Positive developments from its resource assessment of Fischell Brook is definitely a catalyst to look forward to in June! 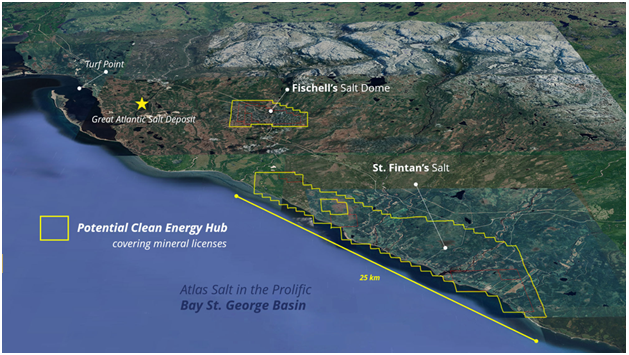 Atlas Salt will also be updating investors on the spin-out of its Fischell Brook salt dome asset and strategic claims into a separate entity as a means of unlocking additional shareholder value. We believe shares of SALT will rise as more information is provided on the spin-out shares investors will receive and will climb higher as it gets closer to the spin-out record date. The CEO of SALT Mr. Patrick Laracy stated “We’ve worked extensively on Fischell’s Brook since 2021 and the related spinout strategy and planned near-term share distribution. Fischell’s Brook is a very strategic asset that has drawn considerable interest from parties exploring Newfoundland and Labrador’s potential in the renewable energy sphere.”

John Andersen, a director of SALT and also the President of Purplefish Capital Management Ltd., a private investment firm and director of NewFound Gold, a gold company that saw its shares soar 988% from 1.24 in August 2020 to a high of $13.50 in June of 2021, has also bought $106,298 worth of SALT stock in May. Mr. Andersen’s purchase may be an additional indication of what is to come for Atlas Salt in the future.

Another stock to keep an eye on for the month of June is Cybin (NEO: CYBN), a psychedelic company involved in psychedelic therapeutics for the improvement of patient health. CYBN announced yesterday that the company has submitted an Investigational New Drug (“IND”) application to the FDA for Phase 1/2a first-in-human clinical trial for its proprietary psilocybin analog called CYB003, and according to CYBN’s CEO Mr. Doug Drysdale, Phase 1/2a clinical trials could start as early as mid-2022! Mr. Drysdale was quoted “This FDA submission is the next major step in the advancement of CYB003, and we continue to work tirelessly to bring this innovative therapeutic option to people as quickly as possible. We look forward to continuing to work with the FDA to initiate the Phase 1/2a trial in mid-2022.”

CYBN has also partnered with Clinilabs Drug Development Corporation, a global, full-service contract research organization that specializes in drug development services to pharmaceutical and biotech companies and provide assistance starting from first-in-human to Phase 3. Clinilabs is a very trusted and reputable name in the industry, having a 21-year history and providing over 675 central nervous system (CNS) clinical trials. We view this as very strategic move on Cybin’s part to engage a reputable firm to help through various phases of clinical trials since little mistakes can be quite costly and very time consuming.

Cybin is also included in several psychedelic ETFs such as the Defiance Next Gen Altered Experience ETF (PSY) whereby the fund holds 374,285 shares and AdvisorShares Psychedelic ETF (PSIL) which holds 991,794 shares of Cybin and is currently the ETF’s top holding as CYBN represents 11.32% of the ETF portfolio and finally Horizions Psychedelic Stock Index ETF (PSYK) which CYBN sits in fifth place of portfolio weight for the ETF at 8.78%.

Like many psychedelic stocks in the sector that got aggressively sold off since the start of the new year, CYBN shares are currently rising out of a near all time low of $.82 cents, prices not seen since its IPO dated November 2020.

Forward Looking Statements: This article may contain "forward-looking information" (as defined in applicable Canadian securities legislation) that is based on expectations, estimates and projections as of the date of the content is published on this website. Wherever possible, words such as "anticipate", "believe", "expects", "intend" and similar expressions have been used to identify these forward- looking statements. Information in this article has been furnished for your information only, is accurate at the time of posting, and may be superseded by more current information. Except as required by law, we do not undertake any obligation to update the information, whether as a result of new information, future events or otherwise. This article should not be considered as personal financial advice. Full Disclosure: Awakn Life Sciences is a client of the parent company of EquityInsight.ca Directors of the parent company of EquityInsight.ca may buy, hold or sell the securities before during or after this publication.