At Equity Insight, we have been following the Property Technology (a.k.a Proptech) space for many years now and have brought some great ideas to our audience. Although Proptech may seem like a small or unsexy area for high-growth investments - it isn’t. In fact, Proptech is a huge umbrella that groups all sorts of commercial and industrial real-estate growth investments.

The chart below gives you a bit of insight in to just how big this market is and how much cash is flowing into the space. Note the 2021 figure is as of July and the full year number could be 100% bigger making 2021 the biggest year for investments into the space. Now, if you are lucky enough to be a High Net Worth individual and get to participate in VC or PE funds you will likely never be able to get exposure to this massive industry unless maybe your pension fund has participated in a very small way - but you’ll never feel it on your PnL. However, you are savvy enough to be reading this article and below is an amazing, undervalued Proptech stock that interested investors should keep on their radars. 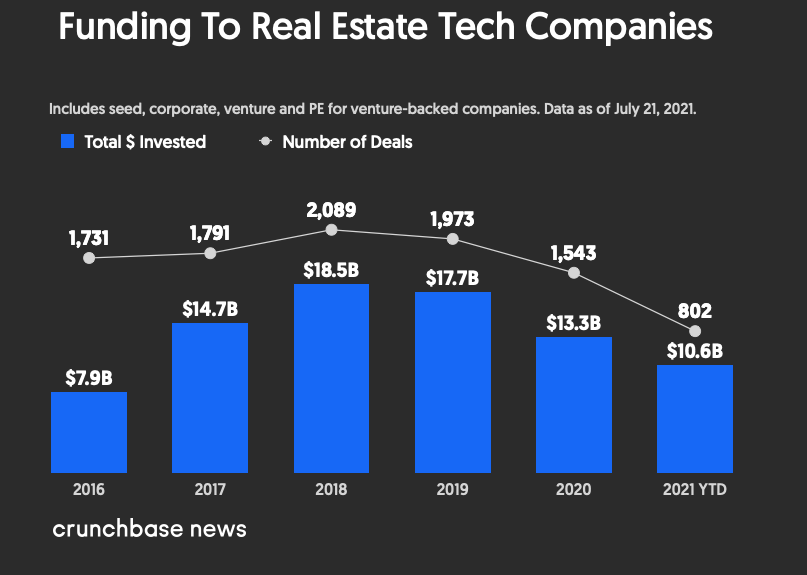 We have been following Universal Proptech listed on the TSX-V under the symbol UPI for almost a year now and have seen it put into place the building blocks for success. Positive developments at UPI include operational execution as well as growing financial strength and performance.

Over the course of the summer the stock sold off for a variety of reasons including seasonal doldrums and investor boredom from waiting for updates from the investment stake in ISBRG Corp. which is rolling out an instantaneous COVID testing technology. Clinical trials at an undisclosed Canadian land border crossing are currently ongoing and we suspect that developments from its investee ISBRG Corp. should come to light in the not-so-distant future. Looking back on the chart we can see that shares of UPI hit an all time high of $.75 cents in mid February when the company announced its investment in ISBRG Corp. and we wouldn’t be surprised to see it test and break its previous 52-week high on positive results and developments.

On October 11th, UPI announced that the company has been awarded approximately $1,000,000 in project work and service contracts relating to Building Automation Systems (BAS) during the month of September! The CEO of Universal Proptech Mr. Chris Hazelton stated “Service contracts lead to additional repair revenue, and we continue to aggressively pursue project work from these sites and growing our installed base. I think it’s a great start to Fiscal 2022.” This newly awarded $1 Million contract for UPI is fantastic news for the company as this represents approximately 10% of the company’s current market cap. Furthermore, Universal PropTech also announced in July that the company had a sales backlog of approximately $6 Million as of June 30th, for an increase of $800,000. CEO of UPI Mr. Chris Hazelton commented "Ten months into our year, and Universal PropTech continues to demonstrate a strong and growing backlog," Mr Hazelton further stated "With no debt, cash on hand and a growing backlog, Universal PropTech is proving that this company is under-valued vs its peers". The company’s sales backlog represents approximately 55% of its market cap and shall convert into revenue as contracts get completed.

UPI has been trading at a valuation of around $11M or approximately 1.1X sales which, in our opinion, is undervalued compared to its peer group on listed exchanges and extremely undervalued compared to it’s VC backed private peer group. With the Santa Claus rally underway in the coming weeks, investors will want to keep a close eye on UPI heading into seasonal strength.

Forward Looking Statements: This article may contain "forward-looking information" (as defined in applicable Canadian securities legislation) that is based on expectations, estimates and projections as of the date of the content is published on this website. Wherever possible, words such as "anticipate", "believe", "expects", "intend" and similar expressions have been used to identify these forward- looking statements. Information in this article has been furnished for your information only, is accurate at the time of posting, and may be superseded by more current information. Except as required by law, we do not undertake any obligation to update the information, whether as a result of new information, future events or otherwise. This article should not be considered as personal financial advice. Full Disclosure: Universal PropTech Inc. is a client of The parent company of EquityInsight.ca. Directors of the parent company of Equity Insight may buy, hold or sell the securities before during or after this publication.