Stocks To Watch For October

Stocks To Watch For October

The recent summer months have been quite tough on small cap stocks with a majority of companies having a significant pullback. As an example of the pullbacks in the overall small cap market, below we see the CSE Composite Index hit a high of 1,030.94 on February 10th 2021, rally from the low 400’s in October/November 2020, and since then has cascaded down approximately 400 points all the way to the mid 600 level where it currently sits. This year may repeat itself with the CSE rallying back to higher levels in the coming months. 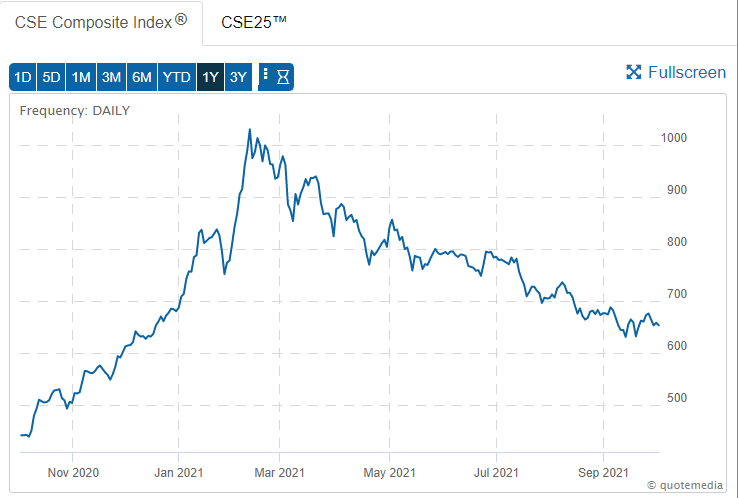 The S&P/TSX Venture Composite Index also rallied during the same time period with the Venture market rallying from low 700 level and hitting a high of approximately 1,100 in February 2021. The venture has also cooled off.

Below, in the chart of the Russel 3000 we can clearly see that, with 20 years of data, there is a strong seasonality for risk-on assets and small caps in the fall. 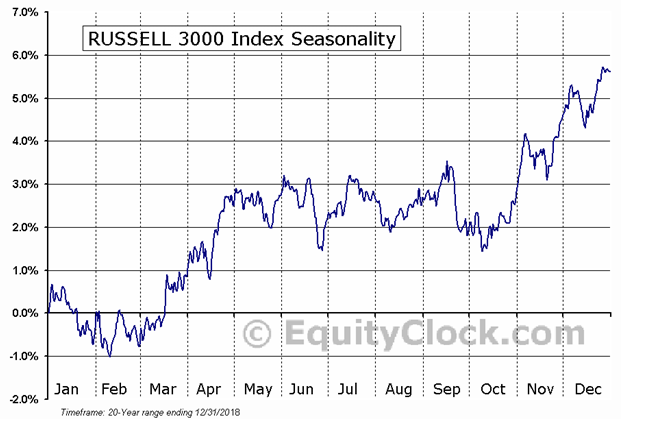 Going into this is the seasonably favorable period that culminate in the Santa Claus Rally, and here are some of the names we are keeping a close eye on.

One stock on watch for the month of October is a company that maybe very familiar to most investors which we’ve been reporting on the developments over the last couple of years, is Kontrol Technologies (NEO: KNR) (OTCQB: KNRLF). The month of August was quite robust as shares rallied approximately 92% after dipping during the summer months and the first two weeks of September saw shares rally an extra 52% as shares of KNR hit $3.10 on September 14th, 2021.  In early August, Kontrol completed its acquisition of Global HVAC & Automation Inc. which had a revenue order book of $155 Million. In addition to expanding its core business from its recent acquisition, Kontrol has also entered into a distribution agreement with Steelcase Inc. a leading dealer network that offers clients architectural, furniture and technological solutions across Canada and the US throughout its 800 dealer locations.

By end of August, KNR announced substantial developments relating to Kontrol BioCloud when the company announced that its viral airborne detection technology was selection by Germany’s professional soccer team Vfl Wolfsburg which is owned by German car manufacturer Volkswagen. Together, the companies will work to market BioCloud around the world and BioCloud will be an official partner for Vfl Wolfsberg of the men’s and women’s soccer season for 2021-2022. Furthermore, what helped propel Kontrol back above the $3.00 mark was in part due to the fact that the company announced that it has achieved record revenues of $6.5 million for the month of August. Kontrol is set to announce its third quarter financials on November 15th 2021 and investors will want to take note of this date as its recent acquisition is sure to give the company a massive bump in revenue which should act as a catalyst that will propel its share price.

In addition to recent news, on September 21st Kontrol had announced that it has entered into a memorandum of understanding (MOU) with a global leading HVAC company for its BioCloud technology. The HVAC conglomerate generates approximately $30 Billion in annual revenue and has over 30,000 distributors around the world and due to competitive purposes, the company name will be kept under wraps for the moment, however one could speculate who that might be. Do you have any guesses? 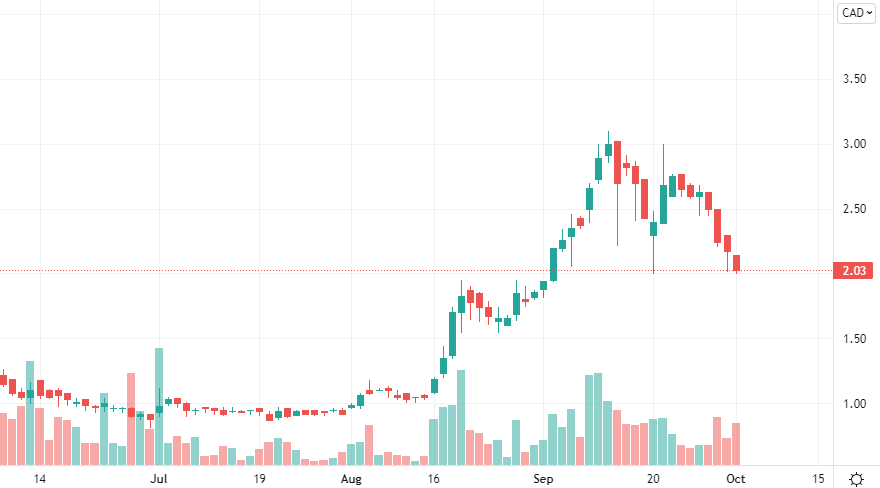 Another company investors may want to pay attention to during the month of October is Canadian post-harvest solutions company Ayurcann Holdings (CSE: AYUR). In August, AYUR launched its very own online cannabis marketplace to serve the Canadian medical market and currently offers 4 Vape products and 2 CBD products. In addition to launching its ecommerce store in August, AYUR also partnered with Her Highness NYC, cannabis luxury brand based out of New York. The agreement will allow AYUR to manufacture and distribute Her Highness NYC products for the adult use market in Canada.

On September 14th 2021, Ayurcann announced that the company has entered into the Saskatchewan cannabis market through its previous wholesale agreement with National Cannabis Distribution ("NCD"), a wholly- owned subsidiary of Kiaro Holdings Corp. This week, Ayurcann announced that it has received its first purchase order from National Cannabis Distribution which includes AYUR’s four Fuego’s vape products and two Vida tincture branded products. The CEO of AYUR Mr. Igal Sudman stated "There is a market demand for high-quality cannabis derived products, and we are confident that both Fuego vape products and Vida tincture products will meet this consumer need”.

Ayurcann is rolling out an impressive strategy from growing revenues through its B2B core business to launching its retail strategy with its very own marketplace to serve its medical patients and now entering the recreational cannabis in the province of Saskatchewan with products expected to hit store shelves in the coming weeks. In addition to rolling out its recreational and medical operations AYUR is slated to announce their next quarterly financials at the end of October and is anticipated to present record revenues. Furthermore, the company is also expected to complete the phase two of its facility expansion and would add an extra 100,000 kg of processing capacity bringing it to total of 300,000 kg’s per annum.

Shares of AYUR have found a base at around $.20 cents and with the number of developments set to transpire over the coming months that may send AYUR back to its IPO highs of $.70 cents or $70 million market cap. 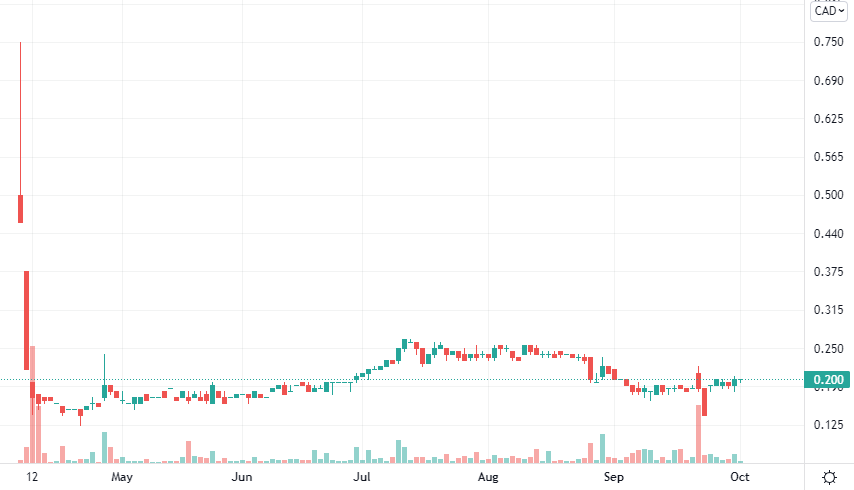 A new name on our watchlist is Molecule Holdings Inc. (CSE: MLCL), a cannabis company that we believe is in the bottoming process and may be set to move in October. Molecule Holdings is a Canadian cannabis beverage company that investors may want to keep their eye on as shares of MLCL seem to have found a bottom here at the $.07 cent mark, down approximately – 50% from the February highs of $.16 cents per share.

MLCL offers a total of 6 different beverage brands to the Canadian market 3 of which are the company’s very own proprietary brands (KLON, SOFA and PHRESH) and 3 other brands the company manufactures for other clients through its B2B beverage solutions. In mid June the company partnered with Greta White North Growers to sell to the province of Québec through the SQDC. Seeing as this news was issued in mid June, we expect to see some additional developments on the expansion into the Québec market in the coming months. Unlike the flower market, the competitive nature for the beverage market would be lower as there are few brands to choose from.

Molecule is a relatively young story having just had it’s first anniversary as a public issuer. As with many new issuers, early investors enjoy the liquidity of the public markets after the trading debut. Once the early investors are digested in the market, these names tend to set up for nice moves as the management tram executes and the story gets out to investors. Molecule Holdings Inc. (CSE: MLCL) seems to be in a good spot for a rally at the moment. 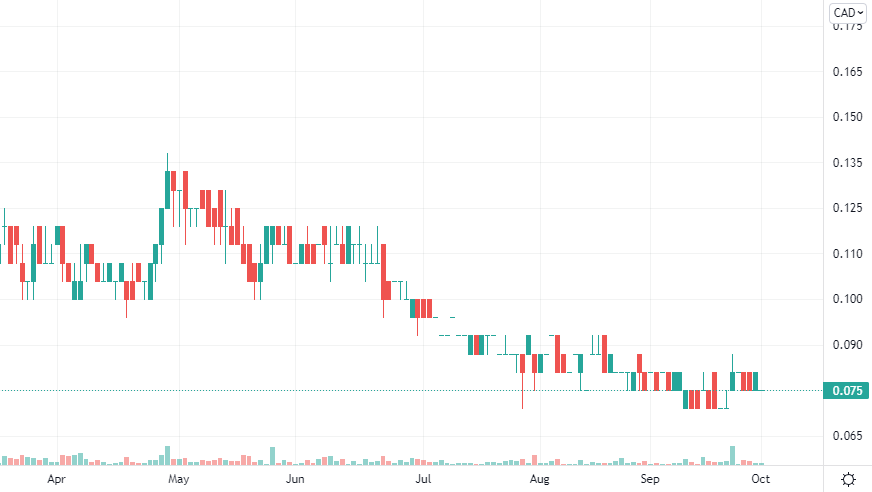 Forward Looking Statements: This article may contain "forward-looking information" (as defined in applicable Canadian securities legislation) that is based on expectations, estimates and projections as of the date of the content is published on this website. Wherever possible, words such as "anticipate", "believe", "expects", "intend" and similar expressions have been used to identify these forward- looking statements. Information in this article has been furnished for your information only, is accurate at the time of posting, and may be superseded by more current information. Except as required by law, we do not undertake any obligation to update the information, whether as a result of new information, future events or otherwise. This article should not be considered as personal financial advice. Full Disclosure: Ayurcann Holdings is a client of the parent company of EquityInsight.ca. Directors of the parent company of Equity Insight may buy, hold or sell the securities before during or after this publication.