Our latest stock alert has done it again! Universal PropTech (TSX-V: UPI) was halted on Wednesday right before the close just as it was pushing through a new 52 week high! On Thursday morning, UPI announced a monster piece of news for a Company that had a market cap of less than $20 million. UPI announced that they had made an investment in and acquired agency rights for a forthcoming technology that is low-cost, non-invasive scan of a person's finger with a harmless beam of light designed to provide confirmation of Covid-19 infection in less than 1 minute. That. Is. Monster.

The technology is called SpotLight-19© and developed to be used specifically for large venues such as airports, border crossings, government buildings, schools, campuses and entertainment complexes. UPI already had a considerable number of clients in those areas through their operating subsidiary VCI Controls. Some of the current clients include the Canadian Government, Canada Post, Brookfield, Manulife, University of Toronto and the Ottawa Catholic School Board. Under the agreement, UPI will have exclusive rights to sell the SpotLight-19 Technology to all government entities including municipal, territorial, provincial and federal, as well as Canadian educational institutions both private and public ranging from primary to universities and colleges.

The SpotLight-19© technology already has proof of concept, and the funding from UPI now enables trials to determine the sensitivity and specificity of the device which will be compared to the accuracy of PCR tests in upcoming trials which are subject to authorization by Health Canada and REB review. Several published studies support SpotLight-19© parent company ISBRG's proof of concept and the application of light to detect viruses has been well documented in the past, see (https://pubmed.ncbi.nlm.nih.gov/29806030/)

The CEO of UPI Mr. Chris Hazelton stated “We have been committed to ensuring safe and healthy workspaces for our clients and facilitating the return of workers to workspaces in the face of the pandemic, and SpotLight-19© as a rapid, inexpensive and reusable testing platform to ensure safe work environments, could be a catalyst to opening global economies. Upon completion of trials and relevant governmental approvals, Universal PropTech expects that it will aggressively market SpotLight-19© products and supporting services to all governmental and education providers across Canada”.

After the halt on Thursday, UPI soared to hitting a new all-time high of $.75 cents on heavy volume and has since stabilized around the $0.65 mark which is still just a ~$20 million market cap. Currently trading at roughly 2X sales and with the recent announcement of groundbreaking testing technology we believe there is still a lot more meat on the bones for Universal PropTech to say the least as UPI is just getting started with lots more to come!

According to Simplywall.st, they estimate that Universal PropTech (TSX-V: UPI) has a Fair Market Value of $3.98 per share! This would represent an increase of 554% from its recent closing price of $.61 cents! 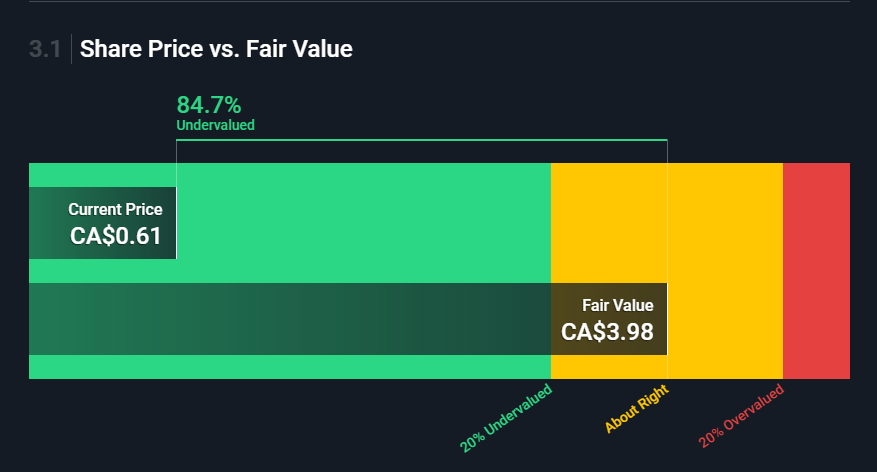 Forward Looking Statements: This article may contain "forward-looking information" (as defined in applicable Canadian securities legislation) that is based on expectations, estimates and projections as of the date of the content is published on this website. Wherever possible, words such as "anticipate", "believe", "expects", "intend" and similar expressions have been used to identify these forward- looking statements. Information in this article has been furnished for your information only, is accurate at the time of posting, and may be superseded by more current information. Except as required by law, we do not undertake any obligation to update the information, whether as a result of new information, future events or otherwise. This article should not be considered as personal financial advice. Full Disclosure: Universal PropTech Inc. is a client of The parent company of EquityInsight.ca. Directors of the parent company of Equity Insight may buy, hold or sell the securities before during or after this publication.