Today shares of Kontrol Technologies (CSE: KNR) (OTCQB: KNRLF) formly known as Kontrol Energy Corp soared 44% from yesterday’s close of $2.92, as shares of KNR hit a day high of $4.20 as the company announced that it has received a CAD $2,000,000 investment from the Ontario Government.

CEM Specialties also known as (CEMSI) is a subsidiary of Kontrol Technology and the pioneers behind the innovative technology of BioCloud, and today the Ontario government through the “Ontario Together Fund” announced that it is committing the $2M investment to enable CEMSI to ramp up production and commercialize the covid-19 detection technology dubbed BioCloud. The investment will allow CEMSI to increase its manufacturing capacity of 20,000 BioCloud’s per month!

The Minister of Economic Development, Job Creation and Trade Mr. Vic Fedeli stated, "It's the creativity and ingenuity of enterprising companies like CEMSI, with its innovative COVID-19 detection technology, that will help Ontario and the rest of the world successfully emerge from this pandemic, while creating hundreds of good jobs for our province's skilled workers”. The Minister of Economic Development, Job Creation and Trade Vic Fedeli was also on the London Live with Mike Stubbs show on Global News radio today and Minister Fedeli seemed quite enthusiastic when discussing Kontrol BioCloud as these will add 250 jobs directly and 750 indirect jobs. The Minister’s post on Twitter has also garnered a lot of attention today as the video picked up close to 10,000 views as of this writing. Also in the twitter-sphere, Minister Fedeli’s tweet was also retweeted by the Premier of Ontario Doug Ford. With Premier Ford retweeting the Minister’s tweet about KNR, now we can say that the Ontario government is aware of KNR’s BioCloud and sales from the government is looking clearer and clearer! 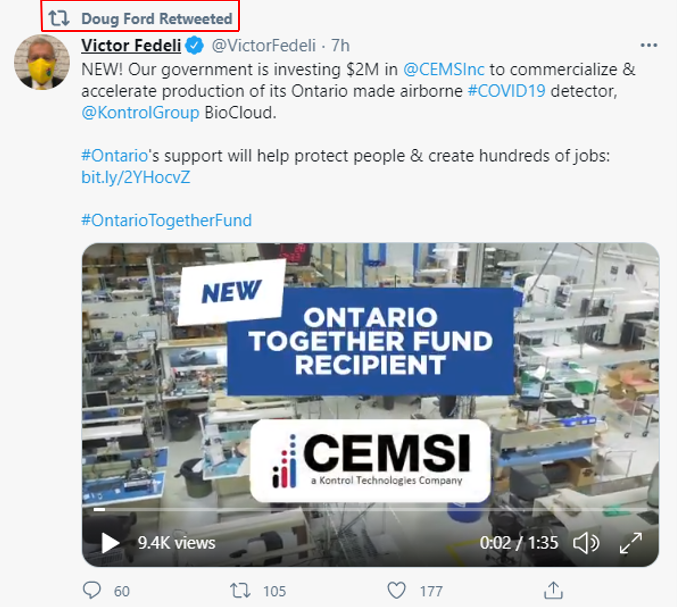 These timely developments come as the Ontario government is opening up schools on February 8th for those outside of the GTA and schools in the Toronto, Peel and York regions will open up on February 16th 2021. On the Mike Stubbs show, the host also brought up schools in relation to BioCloud when Mike Stubbs asked “Minister Fedeli, when you say schools, how quickly can these be put into schools”.  We believe the timing is quite interesting to say the least, and we won’t be surprised if the company receives a commitment of orders from the Ontario government for KNR’s BioCloud as production is ramping up.

We also believe as the company has completed its corporate name change to Kontrol Technologies Corp as announced on February 1st 2021, this will begin a series of big developments for KNR including, CE Mark, testing from the United Arab Emirates, purchase orders and the planned uplisting to the TSX and Nasdaq! With the name change completed and a new $2M investment from the Ontario government, 2021 is setting up to be a very exciting year for KNR and we are looking forward to more solid developments from Kontrol Technologies and seeing new all time highs!

Forward Looking Statements: This article may contain "forward-looking information" (as defined in applicable Canadian securities legislation) that is based on expectations, estimates and projections as of the date of the content is published on this website. Wherever possible, words such as "anticipate", "believe", "expects", "intend" and similar expressions have been used to identify these forward- looking statements. Information in this article has been furnished for your information only, is accurate at the time of posting, and may be superseded by more current information. Except as required by law, we do not undertake any obligation to update the information, whether as a result of new information, future events or otherwise. This article should not be considered as personal financial advice. Full Disclosure: None of the companies mentioned in the article are clients of the parent company of EquityInsight.ca. Directors of the parent company of Equity Insight may buy, hold or sell the securities before during or after this publication.